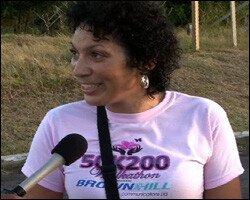 An organisation with a vision to provide quality cancer care in Nevis has been commended by Health Minister on Nevis Hon. Hensley Daniel, for its efforts to raise breast cancer awareness on the island.

Mr. Daniel who joined over 100 walkers on a fundraising 50K-200 campaign organised by the non-profit charitable organisation Pink Lily breast cancer care Nevis and supported by Brown Hill Communications, said the Ministry supported the efforts of such organisations.

“I want to salute Pink Lily for mobilising so many people to come out”¦ We in the Ministry of health are minded to support these things because the more awareness you have the more it reduces the incidence of breast cancer.

“Our efforts are hinged on prevention and so this is a contribution to preventive health care and to thank them and they must be assured always of the Ministry’s full support for these activities,” he said.

Mr. Daniel said he thought it necessary for the people of Nevis to be aware of the large sums of money the Nevis Island Administration (NIA) spent in the treatment of cancer and persons who were affected with the disease represented a huge financial burden on families, communities and the government.

The Health Minister said the assistance from private organisations and communities in relation to funding, awareness and preventive care was welcomed.

“We support joint efforts but its not an either or. Its very important for the community to lead on this so that the Ministry of Health does not have to plan a walk the Pink Lily can do it , another group which is focussing on prostate cancer or whatever ailment it is they can do that and the Ministry supports,” he said.

Meantime, Ms. Lea Parris the founder of Pink Lily explained that the walk from Chicken stone in Gingerland to Sunshines Beach Bar and Grill at Pinneys Beach was in aid of a campaign that would raise EC$50,000 which would provide breast cancer screening for 200 women on Nevis within the next 12 months.

At the end of that campaign, fundraising would continue for the provision of quality cancer care for women and men who live on the island.

Herself a breast cancer patient, Ms. Parris said the cause was one well over due.

“As a cancer patient myself I am still receiving treatment and I was very fortunate to be in England at the time where I was able to get all my treatment free of charge all the mammograms, surgery, everything free of charge it isn’t the same case here in Nevis or in the Caribbean so I am using my experience to try and do something good with it and take the fear out of having cancer,” she said.

Pink Lily was launched on Nevis on February 9th 2008. The inspiration for the charity came following the diagnosis of breast cancer in both her mother and herself within 2 weeks of each other in April 2007.

Aware of the lack of cancer care and treatment in Nevis, Ms. Parris decided to use her own personal breast cancer experience, her skills and her positive attitude to set up an organisation that will raise awareness of breast cancer; provide support for those and their families living with it and raise funds to provide quality cancer care and treatment for women and men living in Nevis.

In celebration of Pink Lily’s first anniversary Ms. Parris pointed to the planned events to mark the organisation’s birthday.

On the 21st there will be a family fun day at the CSS Villa and on February 28 they will host a Charity Gala to thank all its sponsors and contributors and also to remember all those people who have lost to cancer. It is expected to be a night of entertainment, inspiration and education.

In March the Organisation planned to commence an awareness campaign.

“We would like to go into high schools and start educating the young girls. Once they start developing breast they need to know how to check their breast so that if they do detect anything unusual they can detect it early and get it seen to so that we can detect cancer very early.

“I have been filming from the first time when I was diagnosed with cancer I filmed the whole journey from my surgery through treatment having chemo therapy and so they will be on television and television programmes to show people what it is like to go through treatment to take the fear from it,” she said.