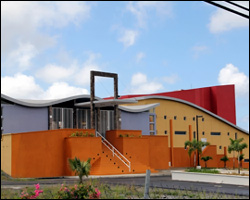 An encore performance was held on May 1 for Seniors and school children.

The impressive, state-of-the art 400-seat facility was officially opened during a grand ceremony on Saturday, April 28.

According to General Manager of NEPAC, Mrs. Deslyn Williams-Johnson, the performances featured a cultural exchange of Nevisian dancers and drummers with Taiwanese dancers and musicians.

Local performances included the Rhythm Dance Theater led by Ms. Diane Hobson, the I- Afrikana Drummers and the Jumping Clowns.

The highlight of the evening for most patrons came when the Taiwanese dancers made their way into the audience, and invited persons to dance on stage with them to the tune of “Nevis Nice,” a local, highly popular calypso song originally written and sung by outstanding Nevisian calypsonian Mr. Crefton” Meeko” Warner, and which has become the country’s unofficial national anthem.

Due to the limited seating capacity (400) of the venue, attendance to the performances were by invitation only.

The National Taiwan University of Arts group is part of a larger contingent presently performing in the United States, with St. Kitts and Nevis being the only stop outside of the U.S.A.