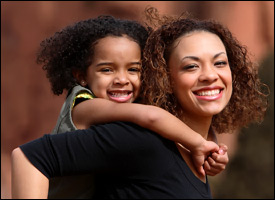 The most senior mother in each of the five parishes on Nevis received an advance Mothers Day token of appreciation on Friday through another programme initiated by the Gender Affairs Division in the Ministry of Social Development on Nevis.

The mothers and their care givers were each presented with a token by Health Advisor in the Nevis Island Administration (NIA) Mrs. Patsy Hanley who represented Social Development Minister Hon. Hensley Daniel who was at the moment attending to other government business overseas. She was accompanied by Gender Affairs Officer from the Department of Social Services Ms. Oslyn Kelly.

In response the senior mothers were not short of words of appreciation and spoke of their individual experiences as mothers. Mrs. Drew said she had nine children and had become a grand and great grandmother.

“I appreciate um. I feel ok to be a mother but I had to go out to toil for them for years. I so appreciate them. Lawd ah toil for dem children. Oh Father ah toil for them! I look after dem, ah look for dem ah toil and toil all day all night for dem. Sometime not a ting for dem to eat ah have to toil, toil, toil. I just do me little sewing and ting. Sometime ah cry all de time, all day ah cry weh me children dem gone,” she said adding that she was happy they had grown up and were now her caretakers.

Mrs. Brandy said she had much to be thankful for and had cared for her 11 children with her late husband. Today they have become her caretakers and had made her a grand, great grand and great great grandma.

“I must say thank the Lord for this morning for this is a privilege for me. My mom didn’t live to be my age none of her sisters or brothers never reach my age and I am thanking the Lord for that. If I live to see October, I will be 92. Oh dear Father thank you. My children, the Father gave me 11 of them and they are all alive thank God. I have a lot to thank God for. He is good but we have to put our trust in him.

“It was challenging to raise them without a mum. My mom died when I was about 11 and I have never had a mother’s love as a teenager but I tried my best with the help of God and my [late] husband. To Mr. Parry and his Cabinet I say thank you, thank you, thank you. I appreciate this, this morning,” she said.

Mrs. Celina Ward who mothered five children and is now a grand and great-grandmother, her recollections of motherhood were difficult back then.

“I have five children three boys and two girls. It was terrible being a mother. It was terrible in the time you know. It is good in all you time now but in our time it was sweet potato and sprat but now all you have cheese and butter. I had a very hard time with my children, very hard time but praise God he bring me through,” she said.

Mrs. Ward six months short of her 100th birthday also registered thanks for her gift and all who came to visit.

Ms. Celian Powell who had two daughters said motherhood was mixed and offered both good and bad times.

For her gift she blurted out “Praise the Lawd. Thank you very much. May God bless each and every one I pray for all of you,” she said.

Mrs. Pinney had eight children and is also a grand and great and great great grandmother and gave thanks.

“Thank you very much. I will bless the Lord at all times, his face shall be continually in my mouth thank God for coming may he bless guide and keep you all and all who are mothers I wish you all a blessed Mothers Day when it comes and hope you all live to see many more. God bless you all,” she said.

At the end of the island wide visit Ms. Kelly explained the Division had targeted the most senior mother in each parish.

“We checked through the area, spoke to persons who know the people in the area we spoke to the nurses in the health centers to help us to identify the most senior mothers. The names that were given we spoke to their care givers and we proceeded in asking their participation.

In Charlestown the most senior mother was camera shy and we had to go the next in line. We were looking at mothers who were 90 and above. Not all the mothers want to be on television but these mothers who were willing we chose just one from the age range 90-99,” she said.