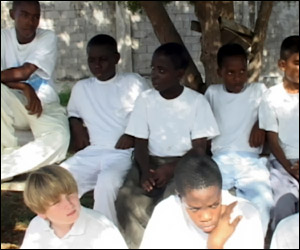 Junior Minister with responsibility for Communications, Works, Public Utilities, Physical Planning, Posts, Natural Resources and Environment in the Nevis Island Administration (NIA) Hon. Carlisle Powell, impressed on a team of U13 cricketers the importance of education in their quest to attain supremacy in the sport.

Mr. Powell, a former cricket administrator and an avid cricket fan, spoke to a group of budding cricketers at Grove Park on Friday May 23, 2008, ahead of a practice session with their coach Mr. Ronald Powell, at a programme entitled “Helping our boys grow gracefully” which was designed to assist the youths simultaneously in their cricket and personal development.

“I want to say to you that there are schools all over the world where they are offering scholarships especially for sport in schools but you are not going to get a scholarship easily, if your education is not of a certain level. They will not take you because you are an excellent cricketer but you can’t read, write and comprehend. They will not want you in the school because you will not pass and in the final analysis, you might be a good sportsman but if you don’t pass the subjects, you will be helping the school to fail you will not help their academic pass rate,” he said.

Mr. Powell pointed to his son Mr. Kieron Powell as one who had benefited from a sports scholarship to study in England who had since been selected as a member of the West Indies U-19 World Cup 2008 squad.

The Minister urged the participants to be smart in their school work and to pay attention to their teachers.

“I want when you come to play cricket to understand that if you are smart you will play smarter cricket and if you are not smart in terms of your school work it will take you longer to achieve in your sports. So please remember that when you are at school pay attention to the teachers because you must remember if you are smart in your education and your school work, you will take your smartness onto that field of play and you will make smart decisions,” he said.

With regard to personal development, Mr. Powell told the cricketers that even at their age, they were responsible for what they placed in their bodies. He admonished them to discuss matters or uncertainty with older responsible persons and to shy away from deception.

Meantime, Mr. Ronald Powell told the Department of Information in a subsequent interview on May 27, 2008 that the programme which commenced on May 16, 2008, was intended to get rid of the stigma attached to boys.

“”˜Helping our boys grow gracefully’ was intended because we were trying to get rid of the stigma attached to boys. Boys can grow gracefully if we as adults play our part in helping them in their overall development,” he said.

Under the programme the cricketers would “Meet the Ministers” of the NIA, and each would be required to bring along a Minister of Religion.

The programme forms part of a training exercise under the Ministry of Sports which is charged with U-13 cricket.

Mr. Powell, who is a volunteer coach for the programme, said that the cricketers were in training for an upcoming two year regional U13 tournament, which will be held in St. Kitts and Nevis in August.