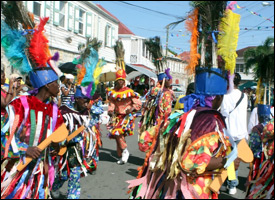 When the Caribbean Festival of Arts (CARIFESTA) 10 commences in Guyana later today, August 22, 2008, a contingent of young masqueraders from Nevis will form a part of the August 22-31 celebration. Minister with responsibility for Culture in the Nevis Island Administration (NIA) Hon. Hensley Daniel said there was a distinct effort placed on masquerades and assured that the group of young persons selected, would make Nevis proud.

The 15 member delegation led by Chairman of the Nevis Cultural Development Foundation Mr. Halsted “Sooty” Byron, left the island on August 21, 2008, and traveled to Guyana as part of a Federal delegation to the Festival, which will be held under the theme “One Caribbean, One Purpose, Our Culture, Our Life”.

“I think the folklore group will form the focus of attention during the CARIFESTA exposition and so we have put together a team of masquerades. Anybody who knows Nevis’ culture would know that the masquerade is at the top of our folklore list and so we have sent a group of young masquerades from across the island.

“We have put a group of them together and I think I should say to the public they have been practicing over the last six weeks preparing for this and so we expect them to do quite well”¦ and I think that our young people who have been selected to participate in the Caribbean Festival of Arts in Guyana, will do Nevis proud and I look forward to hearing great things about their performance he said.

The Culture Minister explained that the annual regional Festival took place at a time when the NIA had just set up the Nevis Cultural Development Foundation for among other things the preservation of the island’s culture. He was of the view that the festival would bolster those efforts.

“I think the Festival is taking place at a time when we have just set up the Nevis Cultural Development Foundation. We have a Festivals Unit inside the Foundation and I think what this does is give fillip to our effort. We expect that having sent the Festivals Coordinator that we will get to see how events are done and have a sense of the tremendous work that has to be done from planning to implementation.

“Of course the young people who have gone [would] get a chance to expose their talent to a wider audience. We have always in the Nevis Reformation Party supported the development of culture and we support a regional mechanism to highlight this culture in which case it is CARIFESTA.

For the first time, a cameraman from the Department of Information also formed part of the delegation. Mr. Kerry Williams will capture the moments as they unfold to be shown to the Nevis public on the group’s return.

The aim of the Caribbean Festival of Arts is to depict the life of the people of the Region, their heroes, morale, myth, traditions, beliefs, creativeness and way of expression; to show the similarities and differences of the people of the Caribbean generally; to create a climate in which art can flourish so that artists would be encouraged to return to their homeland; and to awaken a regional identity in Literature.