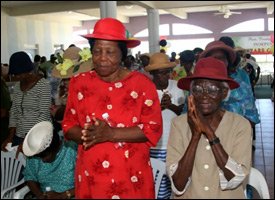 Minister with responsibility for Social Transformation on Nevis Hon. Hensley Daniel told senior citizens from across the island on October 01, that while the international community celebrated them the Nevis Island Administration (NIA) lead the way in their care and wellbeing.

The Minister was at the time delivering an address at a celebratory luncheon and exhibition at the Occasions Center, Pinneys, organised by the Department of Social Development, Senior Citizens Division, to mark the start of a month long celebration on Nevis.

Mr. Daniel pointed to a number of areas to support his claim and cited that under his stewardship; a fully functional Senior Citizens Division was established within the Department; a team of Home Help Care Workers who cared for those who were unable to assist themselves were all established.

He further explained that outreach programmes for senior citizens at the Butlers Community Centre and Flats Mandela Centre had been instituted with similar plans for other parishes on the drawing board.

Also, there was a programme which celebrated the achievements of senior citizens through birthdays, marriages and other significant milestones and next week there is the planned renaming of the Gingerland Primary School after Ms. Joycelyn Liburd, a senior citizen who had a distinguished career in education and in guiding the young generation.

“As the minister of Health and Social services, I have ensured that medication, duty concessions and public assistance are provided to the seniors. We established the Retired and professional Skills Corps to use the knowledge and experience of the aged to shape today’s modern society [and have] provided regular training programmes for caregivers,” he said.

The Minister assured the senior citizens that they had laid a solid foundation for Nevis’ social and economic development and told them that the day’s activity was one way of saying thank you.

He told them that no policy would be implemented to lower the status of the aged and as the 25th anniversary of independence was being celebrated, they had anchored the island’s development due to the solid foundation they had laid.

Meantime, Director of Social Services Department Ms. Sandra Maynard, urged families to continue to care for the seniors and to reach out for help from the Department when it became overwhelming.

“That is what our Department is for,” she said, “don’t wait too late and then place the blame.”