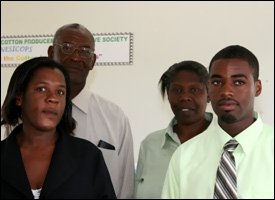 President of the first ever cotton cooperative on Nevis Mr. Winston Pinney described it as a proud moment, when he received the official documents which made the Nevis Sea Island Cotton Producers Co-operative Society Ltd. a legal entity.

The official launch took place on Wednesday under the theme “Reviving the Cotton Industry on Nevis”, at the Ministry of Agriculture’s conference room at Prospect, when Director of Cooperatives Mr. Edred Ward presented the documents.

“It is a proud moment for me as the president or the leader of this newly formed group”¦I want to remind myself and the other cotton farmers/growers that we are just launching, the greater work is yet to be done”.

“We all know what it is to launch something but if we do not keep going at it, it will remain at one position”¦ I am not only your president but I am also a worker aalong with you. I cannot do the work by myself and I would like all of you to join hands with me to make sure this newly formed Society is a success,” he said moments after he received the documents.

Mr. Pinny said he was in the Co-operative for action and recalled his earlier years when he assisted his parents with their work in cotton and noted that he was well aware of the hard work involved.

He used the opportunity to thank Director of Agriculture on Nevis Mr. Keithley Amory for his hard work and Mr. Ward.

Meantime, Permenent Secretary in the Ministry of Agriculture Dr. Kelvin Daly applauded the farmers for their move to form an association.

“I must applaud this new beginning because after hundreds of years of planting cotton on Nevis, this is the first ever cooperative.

“I think it shows the direction at which we are moving into making things a little easier and have persons accountable and to forge the kind of link we need to empower ourselves,” he said.