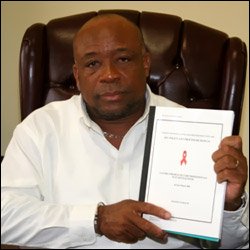 Minister of Health in the Nevis Island Administration (NIA) Hon. Hensley Daniel along with the HIV/AIDS unit today conducted Voluntary Counselling and Testing (VCT) sessions for the second time this year to residents of Nevis.

In an interview at his office, the Health Minister gave an overview of the event.

He also spoke of the current services offered to residents of Nevis through the VCT sessions.

While VCT Day was nationally being celebrated in the federation of St. Kitts and Nevis, residents of Nevis gathered on the grounds of the Administration Building in Charlestown to be tested.  The session featured pre and post counselling sessions in addition to HIV testing.

Minister Daniel recorded his gratitude to his team and the general public for their instrumentality in organizing and successfully executing the event.

“I want to commend the HIV/AIDS unit for bringing the service to the fore, second time in a year, and for continuing to push the idea that people must know their status.

“I want to thank all those persons who have responded so far, thank our workers and I believe that with this continued engagement it will help us to reduce the spread of HIV/AIDS overtime,” Minister Daniel said.