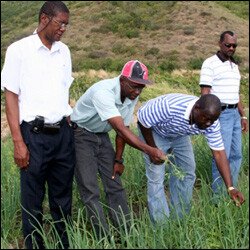 Onion Crop In New River Gets An Inspection

A bumper crop of onions is expected for the 2009 harvest and Nevis Minister of Agriculture Hon. Robelto Hector said he was pleased with the progress he had seen in the fields so far.

Mr. Hector, a former Agriculture Extension Officer, told the Department of Information recently following a visit to the government owned onion plantation at New River, that the sought after commodity helped with import substitution.

“In the past we have exported as far as Tortola, Dominica but onion is something that we use a lot in our diet, we can never produce all the onion that we need. So in terms of the import substitution I am happy.

At present the Department of Agriculture has four acres of land at New River under cultivation and the harvest is expected to commence in March to coincide with the Agriculture Open Day.

Notwithstanding, the Department has began to replant more onions as part of its targeted 15 acres of cultivation. The tier effect is expected to prolong the crop’s harvest till June.