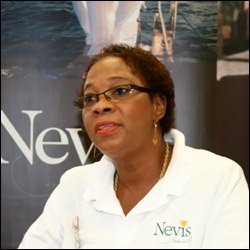 Chief Executive Officer (CEO) of the Nevis Tourism Authority (NTA) Mrs. Garcia Thompson-Hendrickson said on Tuesday December 30th, during the NTA’s report for October to December 2008, that heavy focus had been placed on maintaining Nevis’ reputation as a top island to visit.

“Our main focus has been that of keeping the island positioned as one of the most desirable destinations for upscale travelers seeking the peace and tranquility of the Caribbean,” Thompson-Hendrickson said.

She highlighted that in addition to the Authority’s current efforts of marketing Nevis it had initiated a special incentive for visitors to the island.

“Effective December 29th 2008 to February 15th 2009, visitors staying at any hotel on the island for a minimum or four nights will receive a US$200 airfare credit.  This is for the travel period January 1st to April 10th 2009, and is not combinable with other offers,” Thompson-Hendrickson said.

She added that the recently held Nevis International Culinary Heritage Exposition (NICHE) provided positive marketing of the island, and recorded the NTA’s gratitude to Nevis Television entertainment talk show hosts Chevaughn Claxton and Remigio “Tebulous” Powell for their instrumentality in broadcasting the event.

“Miss Chevaughn Claxton, host, and Tebulous, co-host, of “De Fever” did an extraordinary job of highlighting NICHE on their programme, which has created quite a buzz among the local populace,” Thompson-Hendrickson said.

She spoke at length about the advertising and marketing trips the NTA staff had benefited from during the year.  These included visits to the USA, which according to Thompson-Hendrickson provided good airlift to Nevis; Las Vegas, where marketing Nevis as a dive destination was the focus; and Caribbean islands where Nevis was promoted as a luxury and yachting destination.

In speaking about the NTA’s presence at the World Trade Market (WTM) Thompson-Hendrickson highlighted the benefits it created for the island.

“WTM presented a great opportunity to market Nevis as an ideal destination for UK/European travelers.  It was a successful event, with several days of appointments with Tour Operators, Press and potential Investors.

“As a result of our participation at WTM, a number of articles on Nevis should be featured in the New Year, in magazines such as The Daily Telegraph, Sunday Times Travel, Food and Travel, Caribbean World, Conde Nast Traveler and The Independent,” Thompson-Hendrickson said.

She also used the opportunity to express thanks to overseas consultant for her contribution to promoting the island.

“Special thanks are extended to our Public Relations Consultant, Mrs. Cheryl Andrews and her team for their hard work, dedication and success in the promotion of Nevis in the USA, as a major tourism destination,” Thompson-Hendrickson said.