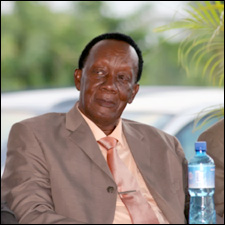 For persons who grew up in and around Zion Village in the 60s, 70s and 80s, it was impossible to escape the influence of local hero Mr. Uhral St. Clair Swanston. That view was echoed by Zion Villager and Minister responsible for Communication and Works on Nevis Hon. Carlisle Powell at the official ceremony to rename the stretch of road from Market Shop to Zion in honour of Mr. Swanston.

“In many ways he represented our local David as he took on the might of politicians like Eugene Walwyn, C.A.Paul Sowthwell, Fitzroy Bryant and most of all Robert Llewellyn Bradshaw, all of late and blessed memory. Swanny appeared to have nerves of steel and the persistence and power of a British bulldog.

“Swanny did not mince matters. If he thought something about you, he would tell you in manly and muscular language. One thing for sure, even those people who didn’t like him or his forthright style, respected him. However, Swanny still enjoys a good laugh and he could be fun loving and full of mirth. Even now Swanny has an easy convincing way with words,” he said.

As he continued to recall Mr. Swanston’s deeds which helped to lay the foundation for a modern Nevis, he noted that as a representative of the people, his fellow villager worked tirelessly to provide an improved supply of drinking water to the people of Nevis.

“Today we have built on the foundation laid by Mr. Uhral Swanston. When we drive on quality roads today, you must remember the efforts of Mr. Uhral Swanston who soldiered on with a shoe string budget and the grace of God.

“Who can begrudge Mr. Uhral Swanston for this honour that we in the Government bestow on him today? When a man is good, he dies not always wear a crown,” he said.

Mr. Powell said that the honour which was bestowed on Mr. Swanston was a fitting present for a life of service – four days before his 74th birthday.

“This road from Market Shop to the Parish boundary of Gun Hill is named in your honour and you deserve it. Indeed, we came marching to Zion on this new wider, straighter, flatter road. Today we come to praise Mr. Uhral Swanston and to honour him. May God continue to bless him and add life to his years,” he said.