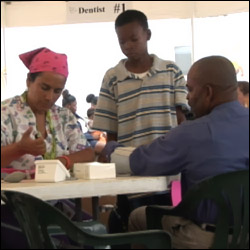 Minister of Health in the Nevis Island Administration Hon. Hensley Daniel expressed gratitude to the organisers of an ongoing five-day free health care services at the Villa in Charlestown and described Trinity Broadcasting Network (TBN) and Friend Ships as a partners in the delivery of health care on the island.

Mr. Daniel made the statement at an opening ceremony on May 20, 2008, to signal the start of the health care programme, which offered care free of charge in a number of areas that included dentistry and eye care.

“If it is that health is a state of mental, physical, spiritual and emotional wellbeing, then the presence of the organisation with its considerable human and financial resources must be seen as a vital partner in the delivery of health care here on Nevis. We believe that you agree with us that health is wealth.

The Health Minister pointed to the health records of Nevis and said there was a heavy debt burden on the financial resources of the island.

“The key risk factors are obesity, high blood pressure, alcohol, diabetes, unhealthy diets and physical inactivity. I am sure that the medical personnel here will tell you the same thing. These factors are largely socially determined so we have the keys to adequate health care in our hands. Remember we are what we repeatedly do,” he said.

He said food consumption patterns continued to put the population at risk of hypertension and that heart disease and stroke were the leading causes of death on Nevis. There was a heavy consumption of sweets which had resulted in increased tooth decay and gum disease.

The Minister said too, there were five new persons who tested positive for HIV in 2007 and there were 14 persons who had been receiving anti retro viral drugs at the cost of EC$45,000 per month.

He noted that within the last 10 months, patients who needed critical care due to rare diseases were flown overseas for medical attention by the Nevis Island Administration.

He said the free health care programme was postponed but the Ministry of Health was pleased that it had finally come to fruition. He decried the efforts of persons who he said attempted to preclude him from the programme and cited that he was stunned since he had been engaged with it at the outset.