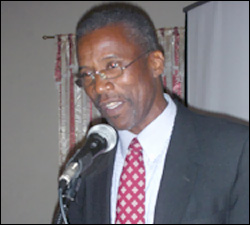 Mr. Farrell was at the time explaining the details of a weekend-long trip to Anguilla and St. Maarten involving Premier of Nevis the Honourable Joseph Parry, Deputy Premier the Honourable Hensley Daniel and Attorney General the Honourable Patrice Nisbett.

The government ministers, backed by a three-member support team, participated in a series of meetings that addressed the developmental projects in Nevis as well as the government’s immediate plans.

“We see it from the NRP-government’s standpoint as a golden opportunity and as part of a process where we report to our people, not only at home, but also abroad,” Mr. Farrell said, adding that “tremendous benefits would come.”

Among the activities was a radio call-in programme on PJD2 where Premier Parry addressed the concerns of Nevisians residing on St. Maarten.

“They [Nevisians in St. Maarten] will be able to understand what is happening in the country. This is an opportunity, not just to see the Premier via computer, but to actually be there to interact with the Deputy Premier as well as the Honourable Patrice Nisbett,” Mr. Farrell explained.

While on St. Maarten, Premier Parry met with the Prime Minister and the island’s Minister of Justice.

A similar meeting was held on Anguilla with the Chief Minister and his Minister of Energy.