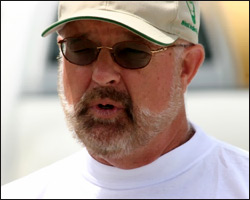 Premier of Nevis, the Hon. Joseph Parry was presented with a copy of the Geothermal Environmental Impact Assessment (EIA) by General Manager of West Indies Power (WIP), Mr. Rawlinson Isaac on Monday morning after the document was filed with financiers in the United States of America. The presentation took place at the Premiers office at the Bath Hotel on Monday.

In response the Premier said the filed EIA to all the parties concerned signaled the forward movement of the geothermal project on Nevis.

“I am pleased to receive this document as it signals the development of the second phase of this project.  I am aware of the new investors who are involved in the project and by the 24th of December an arrangement will be signed with the present shareholders to be a part of this project and that they are committed to use their own funds in the first instance, to make sure the project proceeds early in the New Year,” commented the Premier.

He also noted that in early February, a production drill rig will be on Nevis and work will commence on the development of a production geothermal well. The geothermal plant will also be assembled simultaneously.  The Premier proudly stated that this will bring extra employment to Nevis.

“I am very pleased that WIP has shown confidence in the government by investing heavily on Nevis.  I truly believe that since this project has begun, the region and the international community have been watching Nevis and I believe this project will put Nevis on the map,” said the Premier.

According to a release from West Indies Power Holdings, the EIA was filed with the Nevis Island Administration (NIA) as a requirement by the geothermal development ordinance and the geothermal resource license agreement between WIP (Nevis) and the NIA.

During the meeting, Mr. Isaac noted that the EIA was also filed with the Export Import Bank of the United States (EXIM) and with the Overseas Private Investment Corporation (OPIC) on December 15th, 2010.

He noted that the document was filed because it was one of the requirements necessary to receive funding from these United States government agencies.

Copies of the EIA will be made available for public viewing at the Public Library in Charlestown, Nevis. The document will also be posted on the EXIM and OPIC websites at www.exim.gov and www.opic.gov.

According to the release, Chief Executive Officer (CEO) of WIP, Mr. Kerry McDonald stated:  “WIPN is happy to announce the completion of this project to provide the necessary studies to complete and file the EIA necessary to receive the authorization to proceed with the financing and development of the geothermal resources on Nevis and in the Caribbean.”

West Indies Power is an independent power producer which specializes in the development of geothermal energy in the Caribbean.