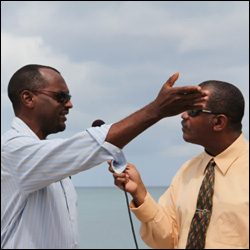 Permanent Secretary in the Ministry of Agriculture Dr. Kelvin Daly described the US$11million Charlestown Community Fisheries Complex earmarked for Gallows Bay in Charlestown, as a project for the people of Nevis in particular the island’s fishers and should not be used as a political football by factions in the community, who he believes, had been opposing the project for political reasons.

The Senior Nevis Island Administration (NIA) Official was speaking to the project funded by the Japanese Government through a grant, during a recent “Eye on Agriculture” Programme hosted by the Department of Agriculture on NTV channel 8 on Monday nights.

Dr. Daly was at the time responding to a letter written by local senior lawyer Mr. Theodore Hobson on behalf of his clients, whose land had been acquired by the Administration for construction of the Fisheries Complex at Gallows Bay.

“Mr. Hobson must have been aware we were negotiating [with his family] in good faith from day one. The land in question is a slither of land about 1/9th of an acre and he and his family had every opportunity to object and nobody did.

“It is not an NRP project it’s a Nevis people project. It was conceived in 2004 under the late Guishard it was manifested up until I got there in 2006 and it continues. Now this is 2012, this is eight years later how much talking can we do?

The Permanent Secretary in the Ministry of Agriculture believed that the letter which was written to the Japanese Government was just another way to curtail the project.

“It’s all politics, its nasty politics because in Nevis people are going to benefit from this project and this does not need to be an NRP/CCM debate. It is unfortunate it has degenerated into that.

Dr. Daly said the Gallows Bay project had received the blessing of fishermen on both sides of the political divide on Nevis, all of who were members of the Fishermans Cooperative.

“A lot of their membership is supporting this project and they see it as a slap in the face for them to have nothing after all these years of fishing to say this is ours nobody can touch this.

“So this is why the fishermen of all cast have come forward to support this project and it is really disillusioning to people to hear oh so much people object. Where are they? Where are all the people objecting? Gallows Bay is over 300 meters I would guess and people are saying that using 10 percent of it for a project to help the fishermen of Nevis is too much. I wonder what planet they are living on?” he questioned.

The documents for the modern fisheries complex at Gallows Bay was signed  between the NIA and the Japanese Government paving the way for the commencement of the project sometime in November.

Leading up to the signing, there were at least six public consultations three held at the Ministry of Agriculture’s conference room and three at the  Red Cross Building in Charlestown which were designed for members of the public to voice their concerns about the project.