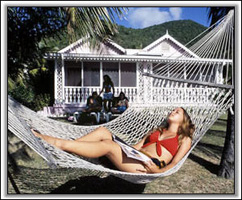 The top travel trade magazine is distributed to more than 90 percent of U.S travel agencies and reaches more than 110,000 travel agents.

Referred to in the magazine as Queen of the Caribees, the article discusses the history of Nevis in particular as the birthplace of Alexander Hamilton; the marriage of Lord Horatio Nelson and Fanny Nesbitt and the Old Jewish Cemetery in Charlestown.

The article also outlined the amenities of some of the island’s small inns including the Golden Rock Inn, the Hermitage Plantation and the Oualie Beach Hotel.

Sunshine’s Beach Bar and Rodney’s Cuisine Restaurant were the eateries focussed on in the article as spots where readers could get a taste of the famous drink, the Killer Bee and steamed fish and Johnny cakes.

In the article, travel journalist Melanie Reffes took time to talk with the newly appointed Chief Executive Officer of the Nevis Tourism Authority (NTA) Mr. John Hanley, who told her that the December 15th re opening of the Four Seasons Resort was a major achievement for the island.

“This will not only impact the tourism sector but the overall economy as it was the island’s largest employer,” he said.

The September issue of JaxFax travel is available now at newsstands.