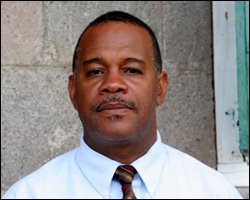 Farmers on Nevis have been asked to resist temptation and refrain from setting fires on their fields, given the dry period the island had been experiencing.

Communications Officer in the Department of Agriculture Mr. Eric Evelyn made the appeal when he spoke to the Department of Information on Monday. He said farmers should stop and ponder on the consequences of a fire before the decision is taken to set one.

“Fire could destroy your crop [part or the entire crop]. In addition it could destroy other farmer’s crops or even other people’s property.

“Fire could do extensive damage to other inputs on the farm such as farm equipment, irrigation equipment, fertilizers and chemicals, store houses, your life or the lives of others if you are careless,” he said.

Mr. Evelyn also noted that out of control fires could destroy valuable farm records that are kept on the property for immediate updates and destroy animals and helpful micro organisms present in the soil.

He explained that the organisms assisted in the improvement in the soil structure when the organic material broke down.

“Fire will also completely destroy organic material or humus which could act as a soil cover which assists in improving both the texture and structure of the soil. After all the plant material would have been destroyed by fire, the land would be left exposed and this of course could lead to severe soil erosion when the rains break,” he said.

Mr. Evelyn used the moment to give farmers some guidelines that should be considered if they had to set a fire, among them the need to seek permission from the Fire Services.

He advised farmers against setting fires when they were alone on the farm or during strong winds.

Also, they should ensure a reliable nearby source of water in case of need; make a safety border around the area to be burnt or ring weeding the area; light a fire in an area which it is not likely to spread and they should not burn dry grass which could be used as mulch material during the dry period.

However, among the pointers he discussed for farmers should the fires get out of hand were to not panic and to call for nearby help or the Fire Services.

“Please do not run away and leave the fire unattended. Even though you may have lit the fire, you should stay around and take responsibility for whatever damaged that were done. Probably the worst thing you can do is to run away from the fire without saying anything,” he said.