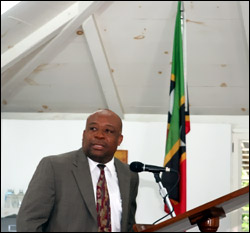 The Minister with responsibility for Social Transformation on Nevis Hon. Hensley Daniel in a recent announcement, disclosed that the Department of Social Services had cut spending as a result of greater efficiency and effectiveness. This he attributed to restructuring over the last year which had had also brought about increased collaboration and corporation.

Mr. Daniel explained at a sitting of the Nevis Island Assembly on April 15, 2008, that the Department had moved from a situation in May of 1998 in the words of a local newspaper “the community of Nevis leads in community development” to a significant reduction in the number of programmes by 2006.

The Administration’s task, he said therefore, was to restructure the Department and reintroduce the programmes.

There are now four Units in the Department of Social Services, a Youth Division, The Gender relations Unit and the Senior Citizens Division.

“The Family Services Unit [is] staffed by trained counselors and they are proactive and interventive [to] stem the tide of anti social behaviour. Despite our economic successes, the difficulty we have in this small country is that anti social behaviour can derail all of our efforts in economic development,” he said.

With regard to the Youth Division, Mr. Daniel said the Probation and Child Protection Services had been reinstated so that young offenders could be turned back from criminal activity and rehabilitated in the new Job Creation Programme and to find opportunities in the Youth Enterprise Scheme.

The Gender relations Unit had seen some significant programmes and referred to the Nevis Pearls Programme, an interventive programme over a 12 week period, which intervened in the lives of young people so that they stayed on course.

About the Senior Citizens Division he said there was a greater focus on the island’s elders through a number of programmes.

“Those of us who look at the television would recognise the increased focus on the welfare and wellbeing of senior citizens. As such we have a regular senior citizens group meeting at Butlers Community Centre on Mondays, we have one in St. Johns on Wednesdays and we have one in Charlestown which deals with the tours.

“By the end of the year, we expect to have all of the parishes with a senior citizens group, providing opportunities for them to enjoy the later years of their life,” he said.

Mr. Daniel described the services that obtained at the department prior to having assumed office about 20 months ago under the umbrella of the Nevis reformation Party -led Administration as having been of a “disjointed nature” which led to “tremendous inefficiencies and huge gaps.”