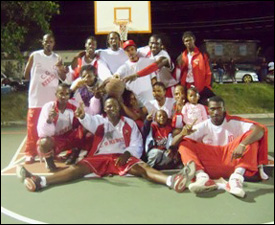 The Jospeh Parry Cotton Ground Rebels has made history as they have become the first Nevisian team to make it to the St.Kitts National Basketball SKABA Finals. The unprecedented event occurred on Saturday October 9th when they defeated the St.Pauls Tuff Knots 90-74 to complete a clean sweep SKABA Premier Division playoff semifinals series victory. The Rebels totally dominated the game and the series as St.Pauls were simply outmatched particularly with the absence of their 3 main players in former SKABA MVP Nasharn Maynard, Noren Myanrd and Javid Williams all of whom are in the US fulfilling scholarship opportunities.

Described as the biggest team in SKABA the frontcourt of Cotton Ground Rebels at an average height of  6′-7″ were simply too much for the Knots to handle. The Knots relied heavily on the superb play of guards Clayton Powell and Karis Douglas however they were simply not enough to overcome the imposing CG Rebels Team.

Coach Gene Amory expressed joy at his teams success but was sure to declare that the job is far from being done.

“When we came to the SKABA league in 2005 many saw the team as a flash in the pan novelty. However we made our presence felt immediately as we won the “A” division in our first year in the league. We were promoted and we have maintained our presence in  the elite Premier division ever since,” said CG Rebels Coach Gene Amory.

“Our goal from day one was to win the SKABA National Championship and that remains our goal today . So although I am quite pleased with the success of the Rebels thus far ,particularly this year with our finals berth, the job is yet to be finished and will only be completed with a SKABA title which we intend to take to Queen City this year,” Amory continued

The Rebels series victory ensures for the first time a St.Kitts vs Nevis finals .

Fans are already screaming for a home and away type finals series but the SKABA has not yet revealed any plans for such.

“Cotton Ground Rebels reaching the SKABA finals has certainly created many opportunities for SKABA and basketball in the federation. Fans are already salivating at the possibility of a home and away series . However the SKABA management has yet to discuss such a possibility and I am almost certain that we will discuss at length and come up with the best possibility in terms of convenience, practicality and feasibility. There are many things to consider when implementing a home and away finals which is unprecedented in SKABA. So although it sounds good it may very well not be practical or feasible as alluded to earlier. However the SKABA management will no doubt give it significant consideration” said SKABA General Secretary Wallis Wilkin.