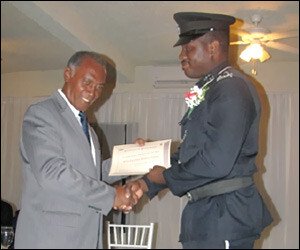 Officer Kishorn Charles is the Nevis Division of the Royal St. Christopher and Nevis Police Force (RSCNPF) “2014 Constable of the Year”.

Constable Charles, who works in the Violent Crimes Unit, received the designation on Saturday, February 28 at the Constable Awards Ceremony and Dinner held at the Occasions and Entertainment Arcade at Pinney’s Industrial Site, Nevis.

Premier the Honourable Vance Amory congratulated the men and women of the RSCNPF serving in Nevis on behalf of the Nevis Island Administration (NIA).

“The business of policing is not easy…,” the Premier told the gathering, while highlighting the current challenges in antisocial activity. “I think we owe a very serious debt of gratitude for the ongoing duties which our police officers perform to ensure that we as citizens of this country continue to live and enjoy the comfort of our homes and the safety of our streets.”

Prime Minister and Minister of National Security Dr. the Honourable Timothy Harris highlighted the “blueprint for progress” agenda laid out by his government.

“We acknowledge that law and order is critical to the achievement of prosperity individually and collectively,” the Prime Minister stressed. He encouraged the rank and file to remain committed to duty, in order to reduce crime through “discipline and hard work.”

“My government has assured that we will provide all the resources that we reasonably can provide to the agents of law and order,” Prime Minister Harris emphasized.

The legal structures are also to be expanded to establish a new court that deals specifically with drug and gun related crimes. Preliminary discussions have already taken place with officials from the OECS Supreme Court.

Prime Minister Harris congratulated Constable Charles as well as the other nominees for their outstanding performance. The second and third place ranking for the Nevis Division Constable of the Year Award went to Antonio Browne of the Crime Scene Unit and Ronrick Huggins of the Newcastle Police Station, respectively.