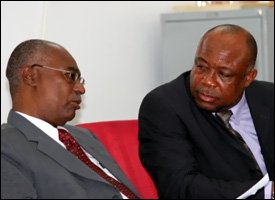 Minister of Health on Nevis Hon. Hensley Daniel said as the Nevis Island Administration (NIA) continued its focus on greater health care for the island’s people. The first group of patients from Nevis leave the island for specialised medical treatment in Cuba shortly.

Mr. Daniel said at a sitting of the Nevis Island Assembly on Monday, that an agreement signed earlier this year with the government of Cuba for the treatment of patients from Nevis through the Cuban Medical Services was something new.

“The first group of patients will leave at the end of this month. They are going to a place where specialised medical care is available at a reasonable cost.

“In an environment where 60 percent of the population have no health insurance, this is timely and is yet another strategic objective of the Ministry of Health,” he said.

The Health Minister also pointed to other advances made in health and pointed to the Logic 7 Ultra Sound Machine that was operational at the Alexandra Hospital.

The brand new machine, he said, replaced a dysfunctional second hand machine that was purchased in 1996 by the former Administration.

Mr. Daniel also spoke of the new Colposcope machine which had been installed at the Hospital. The machine is used in the early detection of cervical cancer and treatment of the disease which continues to affect women in the Caribbean.

He said the Colposcope machine was a donation from the government of Spain to 12 islands of the Caribbean Community (CARICOM) which included St. Kitts and Nevis. Training for local medical staff in the use of the machine was sponsored by the Spanish Government and CARICOM.

“The equipment along with the training provided will enable us to reduce the rates of morbidity and mortality of cervical disease in St. Kitts and Nevis and by extension the wider Caribbean region,” he said.

Mr. Daniel explained that cervical disease and cancer was a major global problem which was largely preventable.

He said though there was a significant reduction in the increase of the disease in developed countries, the developing world had the 4th highest rates in the world with the highest mortality rate from the disease in the Americas.