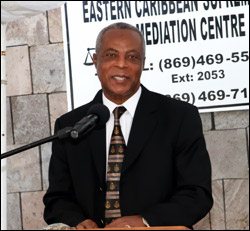 “Mr. Rawlins as most would be aware hails from the island of Nevis and I believe that he brings a fine judicial mind to the Eastern Caribbean Supreme Court in the top position of Chief Justice. He exemplifies what hard work can do and what one can achieve by working very hard in the field of endeavour that one chooses in life.

“Mr. Rawlins joined the judiciary of the Eastern Caribbean Supreme Court in 2000 and it only took him about eight years within which to be elevated to the position of Chief Justice.  To me this is an indication of the quality of Mr. Rawlins as a judicial official of the courts,” he said.

Mr. Nisbett referred to the occasion as a landmark for the people of Nevis. He explained that although Nevisians had excelled in sports on the international stage, the appointment of Hon. Hugh Rawlins to the top position, demonstrated that Nevis could also produce judicial officers who could achieve the highest position in the Judiciary in the Eastern Caribbean and beyond.

Prior to his appointment, Honourable Rawlins began his professional career as an uncertified teacher from 1969 – 971. In 1974 -1976 he served as a graduate teacher and in 1976 – 985 was an assistant secretary in the Ministry of Agriculture, Housing and Labour in St. Kitts. He was the [Acting Head, Department of Labour Saint Kitts and Nevis from December 1977 – 1978]. In1985 – 1988 he served as crown counsel, St. Kitts and Nevis and became the Acting Registrar at the High Court, St. Kitts and Nevis and also served as an additional Magistrate in District “B” from 1988 – 1989.

In 1989 – 1995 he became the Solicitor General, Saint Kitts and Nevis. During that same period from February to June 1994, he also worked as a Temporary Lecturer in Law and in 1995 – 2000 as a Lecturer in Law at University of the West Indies. In 2000 – 2002 he served as Master in the Eastern Caribbean Supreme Court and served as High Court Judge, from 2002 – 2005. He was appointed as Court of Appeal Judge to the Eastern Caribbean Supreme Court from 2005 till his most recent appointment.

The ECSC was established in 1967 by the West Indies Associated States Supreme Court Order No. 223 of 1967. According to the ECSC, it is a superior court of record for the nine member states, six independent (Antigua and Barbuda, the Commonwealth of Dominica, Grenada, St. Kitts and Nevis, St. Lucia, St. Vincent and the Grenadines) and three British Overseas Territories (Anguilla, British Virgin Islands and Montserrat) and has unlimited jurisdiction in each member state.

The functions of the Court are to interpret and apply the laws of the various member states of the OECS; to decide cases of both civil and criminal matters and hear appeals.