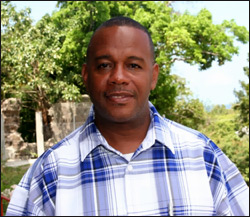 Chris Evelyn – The man behind the Nevis scout movement.

A cross section of Nevisians came together recently in an attempt to revive the island’s Scout Movement. The initiative came against the increased involvement of the Federation’s youths, in particular the males, in criminal activity.

The group led by Ms. Laurel Arthurton, has organised a weekend training camp for potential scout leaders which would be held at the Hanley’s Road Community Centre from Friday June 20, 2008 to Sunday June 22, 2008.

Mr. Eric Evelyn, one of the driving forces behind the initiative in an interview with the Department of Information on June 18, 2008, spoke of the importance of the Scout Movement.

“The Movement was very, very vibrant here on Nevis at one point in time and a lot of persons would have benefited from being a part of the Scouts.  Of course, when you are in that movement you learn discipline and you learn a lot of things,” he said.

According to Mr. Evelyn, the initiative to revive the Movement was taken at an important time.

“We know what is happening right now with our young people here in St. Kitts and Nevis especially our boys and right thinking individuals should do anything that is possible to arrest the problem that’s happening.  I think one way of doing this is to get young persons mobilised and into movements like these,” he said.

He appealed to the public and parents in particular, to support the movement and to offer their assistance to the organisers of the upcoming training camp.