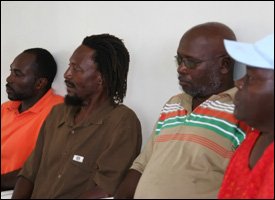 Members Of The Nevis Farmer’s Corporation

Persons involved in agriculture on Nevis have been urged to utilise any assistance they received from local or international sources to the benefit of consumers on the island.

The urging came from Minister of Agriculture on Nevis Hon. Robelto Hector who was at a ceremony to witness the presentation of a $41,300 cheque to the Nevis Growers Corporative, from a Canadian funding agency. He registered the Nevis Island Administration’s (NIA) appreciation for the support of the island’s farmers.

“Today you are getting assistance and it is my hope as an organisation, we would see the translation among our consumers,” he said of the Canadian Funding for Local Initiatives (CFLI) grant.

The Minister also called on the farmers of the Cooperative to continue to strengthen themselves and to be productive. He said if they did not sustain their growth, as an organisation, they would not have met the objectives outlined in a triangular structure set up by the Ministry of Agriculture.

The structure, he explained, was a three way linkage system which operated in agricultural development. It included the farmers, government and allied agencies that assisted.

He used the opportunity to thank Inter-American Institute for Cooperation on Agriculture (IICA) Director and Nevis’ former Director of Agriculture Mr. Augustine Merchant who helped to broker the grant as he pointed to the link between the agencies involved and the NIA.

“I want to thank Mr. Merchant for his work. Too often the satisfaction is only known at the Ministry level. These are organisations the government in some way contributes to and their contribution is always based on the satisfaction or performance of the work done.

“Today when we see Mr. Merchant here with us as an arm of IICA and a part of the triangular linkage, it is part of the satisfaction of work and I want to thank him for his efforts.

I want the records to reflect our gratitude to Mr. Merchant, to IICA and all the other allied agencies that tend to assist our farmers,” he said.