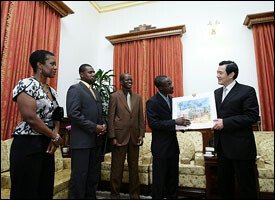 Speaker of the St. Kitts and Nevis National Assembly, the Hon. Curtis Martin says the twin-island Federation desires to cement its relationship with the Republic of China on Taiwan.

Speaker Martin, who led a three-man delegation to National Day activities in Taipei, gave the Taiwanese President this commitment, when the delegation paid a courtesy call on His Excellency Dr. Ma Ying-jeou.

“We reiterated that in the future, we will continue to make every effort to speak on behalf of Taiwan in support of meaningful participation for Taiwan in international organisations. A special appeal was made for President Ma to visit the Federation sometime in the near future. From all indicators, President Ma looks forward to being here,” he told the National Assembly during its recent sitting, in the presence of Taiwan’s Resident Ambassador of the Republic of China on Taiwan, His Excellency Rong-Chuan Wu.

“In addition to working to strengthen substantive and cooperative relations with its diplomatic allies, President Ma said Taiwan’s objective is to expand room for the ROC’s economic sustainability. The President said that St. Christopher and Nevis is a staunch friend and ally of Taiwan. In the future, he said, he will do his utmost to promote cooperation between the two countries, enabling the bilateral friendship to become even stronger,” said the National Assembly Speaker.

Speaker Martin expressed profound thanks and appreciation to Ambassador Wu for extending the invitation to him as leader of a delegation and Speaker of the National Assembly to visit Taiwan. The Speaker was accompanied by the Deputy Speaker and Parliamentary Representative for Constituency Eleven in Nevis, the Hon. Patrice Nisbett and the Parliamentary Representative for Constituency Five on St. Kitts, the Hon. Shawn Richards.

“I think I speak for all invitees, when I say that the experience was “first class” by any and every measure and we were treated like kings in another landscape some 20+ hours flight away from St. Kitts and Nevis,” said Speaker Martin, who said that highlights of the visit included the meetings with President Ma Ying-jeou; the President (Speaker) of the Legislative Yuan, Hon. Jin””pyng Wang and officials of the Ministry of Foreign Affairs; the Agricultural Technical Mission and the spectacular National Day Celebrations,” Speaker Martin informed lawmakers.