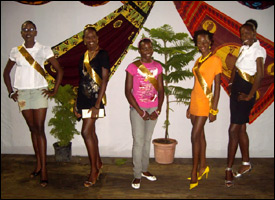 The contestants in this coming Friday’s Miss Saddle Fiesta Queen Pageant continue a number of social engagements this evening (Tuesday).

The five young ladies, who were presented to the community at the official opening of Saddle Fiesta last week Friday night, will be hosted to dinner at Marshall’s by Prime Minister and Parliamentary Representative, Hon. Dr. Denzil L. Douglas.

The contestants were presented to the community during last Friday’s official opening of the Saddle Fiesta activities at the Saddler’s Primary School.

Last Sunday, the contestants were joined by Prime Minister Douglas at a Church Service at the St. John Anglican Church, hosted to breakfast and lunch at the home of Christopher’s Cottage in Saddler’s, participated in a clean-up at Lynches Bay and appeared in bath suites at the Bikini Bash in the afternoon.

The events planned continue tomorrow Wednesday with Elderly Appreciation Day. Senior citizens of the community will be taken on an island tour which ends with luncheon at The Oasis at Frigate Bay.

The Ms. Saddle Fiesta is on Friday 22nd August at 8:00 P.M at Festival Village on the grounds of the Saddlers Primary School. Saturday 23rd at 5:00 A.M. is J’Ouvert and the Parade of Troupes at 2:00 P.M. The Prize Giving Ceremony is planned on Saturday 30th August at 8:00 P.M