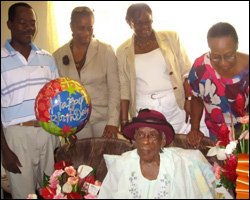 “Ninety two and still batting and going strong”. This was the sentiment expressed by those present at the birthday of Miss Bronte Clarke on Monday October 26th at her New Pond Site home. This was not only a birthday celebration but also a celebration of the life and contributions that this Senior Citizen has made to her family and to our society.

On hand to celebrate with her and to wish her continued good health and happiness were  Minister of Health and Social Development the Hon. Rupert Herbert, Social Assistance Supervisor Ann Wigley ,  Glenroy Blanchette, People’s Action Movement Candidate for East Basseterre, and also Mrs. Wendy Grant, wife of Mr. Lindsay Grant, political leader of the People’s Action movement, Mrs Kaye Menon ,President as well as other members of the National Womens group .

Miss clarke, in responding , traced the often-difficult path to this milestone. She does not weary in expressing pride of her sons’ and daughter’s accomplishment. Most proud in having given this Nation its first Prime Minister, Dr. The Right Honourable Sir Kennedy Alphonse Simmonds. Miss clarke was showered with gifts, hugs and kisses, and best wishes for continued health and blessings from the Almighty.

Ms clarke was born on 26th October 1917.  She is the mother of four loving children, Kennedy, Leroy, Randy and Sonia, all of whom have achieved successful careers.  Her son, Dr. Leroy Richardson, was on hand to share in her birthday celebration.

Truly, this Month of the Elderly has been graced with the birthday of a great unassuming woman; a godly woman; a woman whose contribution to our Nation cannot be fathomed.