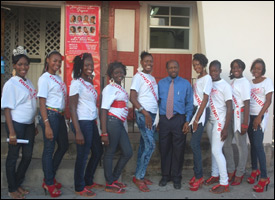 The countdown to the annual Miss Labour 2011/2012 on Saturday night gained momentum Friday afternoon with a mini-motorcade through the streets of Basseterre.

At Church Street, in front of the headquarters of the St. Kitts-Nevis Trades and Labour Union and the National Secretariat of the St. Kitts-Nevis Labour Party, Prime Minister Hon. Dr. Denzil L. Douglas met the teens and encouraged them to do their best at Saturday night’s performance which takes place from 8:00 PM at Carnival Village.

Mr. Fough said that a sideshow is being planned at which the main band will be The Grand Masters along with local artistes, Nicha B, Rolhensha, Jah Fire and  C-Money.

The contestants were guests of honour at a cocktail party on Thursday night.

A public meeting in Central Basseterre, at the corner of Central Market Street and Central Street will be held on Sunday 1st May at 8:00 p.m. and the traditional Labour Day March on Monday 2nd May will be held.