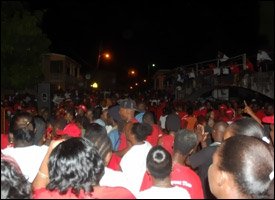 Minister of State in the Ministry of Tourism, Sports and Culture, Sen. he Hon. Richard “Ricky” Skerritt says the upcoming Federal Elections is about the choice between a Labour Party Team with a “solid track record” and “a good balance of youth and experience” as opposed to a group of men who lacks a track record.

“It will be a choice between the known and the unknown, between certainty and uncertainty, between low-risks and high-risks,” Sen. Skerritt told a massive meeting of the governing St. Kitts-Nevis Labour Party in Old Road on Sunday night.

He stressed that the elections, constitutionally due by October this year, was a time to rally behind the leadership of Prime Minister Hon. Dr. Denzil L. Douglas “and his very competent and able candidates.”

He said there is no other Party in the Caribbean who has done more to give a helping hand to those who need it. “That is what makes this Labour Party special. It is a Party with a track record that goes beyond the call of duty to help those in need.”