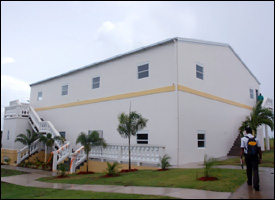 One day after celebrating National Heroes Day a two-storey building at Windsor School of Medicine has been named after the Federation’s First National Hero and Father of Independence, The Right Excellent Sir Robert Llewellyn Bradshaw.

St. Kitts and Nevis Prime Minister Hon. Dr. Denzil L. Douglas, cut the ribbon Friday morning to officially open the new two-250 student classroom facility at the start of the new school year in the presence of scores of students. The university welcomes 300 new students bringing the student population at Windsor University to 1100.

In welcoming Prime Minister Douglas, President of Windsor School of Medicine, Dr. Gaddam thanked the Government and People of St. Kitts and Nevis for giving the educational institution the opportunity for local and foreign students the opportunity to “become something and to do something in this country.”

Dr. Gamma noted that it was 10 years ago with Dr. Douglas as Prime Minister of St. Kitts and Nevis, Windsor School of Medicine moved from the Turks and Caicos Islands with 8 students.

“He has been an advocate of the student community coming here to St. Kitts. Dr. Douglas was at the opening of the school and 10 years after, he has seen the progress of the university,” said Dr. Gaddam, who expressed thanks to the St. Kitts and Nevis leader, his Government and the People, on behalf of the Faculty, Staff and students.

“The school has been established here because of the dynamic leader like him,” said Dr. Gaddam.

Dr. Douglas in his address to the students thanked Dr. Gaddam for naming the facility in honour of the First National Hero and Father of Independence, The Right Excellent Sir Robert Llewellyn Bradshaw.