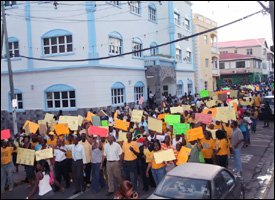 The leadership , the rank and file of the St.Kitts-Nevis Opposition the People’s Action Movement and hundreds of other ordinary citizens and supporters of democracy  took to the streets of Basseterre in  solemn yet very vibrant demonstration against the continued attempt by the Denzil Douglas regime to forcefully gerrymander constituency boundaries on the eve of the country’s next general election. Although this demonstration was smaller,  with just over 1000 marchers, with less fanfare than the massive march for fingerprints held in 2007 the atmosphere of determination on the part of the marchers was even stronger. It was clear that most felt that the severe nature of the current attack on the Constitution and our democracy demanded a more determined response.

The event was the culmination of several months of peaceful though concerted resistance to the clear intention of the Prime Minister to try to manufacture an advantage for the  Labour Party Government in the next poll at the expense of the Constitution and the rule of law.

After weeks of legal trials, public meetings and radio broadcasts exhaustively addressing this issue a peaceful protest was the logical next step. The march began just about 5:00 pm and attracted just over 1000 participants who slowly made their way along the main thoroughfare in Basseterre from Greenlands to Bank Street waving placards with trenchant messages to the Prime Minister to “ring the bell” and “leave the boundaries alone.”  They sang and rang bells and ignored the inevitable taunts of a few Labour Party supporters who tried to cause confusion from the sidelines. There was no doubt to the onlookers who crowded the sidewalks; most in Party colours and in support of the event that the country can be entrusted to the hands of the men who lead the marchers as there was no inciting of people to commit crime against people or property, no children dragged from school.

This was in stark contrast to what happened from 1993 – 1995 when the Labour leaders did their best to destroy the development that had happened since Independence .

“I am satisfied with the march and rally and the clear message it has sent  to Prime Minister Denzil Douglas and his labour party,” said Deputy Political Leader MP Hon. Shawn K. Richards.

Elections are constitutionally due by March 2010 and recent polls have shown that the ruling Prime Minister Denzil Douglas Led Labour Party has lost significant ground since the country last held election in October 2004.