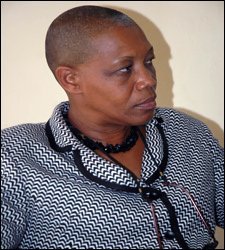 Marcella Liburd , Labour’s Candidate for Central Basseterre in the upcoming elections has been the focus of a recent court case in which her neice and nephew have sought the protection and assistance of the court to preserve the estate of their late father Fitzroy Bryant. Liburd is the sister of Bryant and aunt of the claimants (Bryants Children) as well as administrator of the Bryant estate.

According to court documents the claimants (the Bryant Children)  expressed dissatisfaction with the manner in which the Executrix of their father’s  Estate , Marcella Liburd, was administering the Trust of their Late father.

The  court document stated: “the only two beneficiaries under the Trusts created by the will, and of property vested in the Estate of the testator Clarence Fitzroy Bryant, deceased are dissatisfied with the manner in which the said trust of their late father is being administered in relation to them and in the way in which the trustee(Marcella Liburd) has managed and administered the trust property and trust money. They are therefore requesting the protection and assistance of the court to preserve the estate , and in particular the objects of the trust constituting real estate and monies in the bank’

The Bryant Children also made recommendations to remedy the unfortunate situation in which they felt that their aunt Marcella Liburd was not treating them in a satisfactory manner as the only two beneficiaries of their fathers estate of which Liburd is the admnistrator .

Some of these recommendations as presented in the court document included the variation of the appointment of Ms. Liburd as the sole trustee of the trust by the appointment of two additional trustees by the court. It also stated that alternatively the recommendation was made that the appointment of Marcella Liburd as Sole Trustee be revoked and two new trustees be appointed by the court in the exercise of inherent powers of the court and or pursuance to the powers of the court under the trusts act no. 23 of 1996. A further alternative was also recommended that an order giving direction for the due and proper administration of the trusts created by the will of the late Fitzroy Bryant. Also included in the recommendations by the claimants (Byrant’s Children), was an order restraining the defendant, Ms. Marcella Liburd, from selling and disposing of certain pieces of real estate contained in the trust without written consent of the claimants.

The court document or claim no. SKBHCV2005/0048 in the statement of claim highlighted the fact that the children were accustomed to a particular lifestyle due to their father. The claim stated that the children were accustomed to regular chaperoned trips to the US , UK and Canada and attended the Convent School from their entry into the school system. The claim went on to state however that immediately after the death of  Bryant all of the listed necessities and luxuries ceased and the Sole Executrix namely Ms. Marcella Liburd “arbitrarily determined, without discussion or consultation with the guardians of the claimants, that the needs of the claimants in monetary terms did not exceed $500 per month and began to pay the amount to each claimant.” However the claim went on to state that the the $500 allowance was not paid regularly . The court document stated ” the allowances were frequently delivered to the recipients at irregular intervals because the defendant pleaded “pressure of work” and other business commitment as reasons for not being able to attend to the administration of the trust in a proper manner.”

The statement of claim stated that the children of Bryant experienced endless and countless difficulties in getting their aunt and Executrix of their fathers multi-million dollar estate, Ms. Marcella Liburd, to even purchase school books for their education. It went on to state that Ms. Liburd made no effort to foster any kind of healthy relationship with her neice and nephew or their guardians. And has given to Bryants Children or their guardians no account of the property left in trust for them as beneficiaries of the trust. It also stated that the trustee, Ms. Liburd, since the death of the testator, Mr. Bryant, the trustee sold off valuable real estate which constituted the trust property without consulting or informing the beneficiaries,  namely the bryant children , of the reasons for the sale or making account of proceeds .

According to the claim to the best of the information known  Bryant’s estate at the time of his death included the following property : 1) A property at Monkey Hill, 2) Property at New Road, 3) Property at Shear Lane,5) Property at Dorset, 6) Property on the island of Nevis, 7)A red sports car, 8) A Jeep, 9)An investment in Merryl lynch, New York to be used for the education of his children, 10) A Bank Account at the Royal Bank to be used for the payment of his debts, 11)Bank Accounts at Scotia Bank and National Bank. In addition the claim stated that the National Bank Trust owed Mr. Bryant over 1 million dollars in which court proceedings was brought by Marcella Liburd for the recovery of said money. The National Trust settled out of court however Ms. Liburd has refused to disclose the details of the suit or the settlement to the her brothers children of her own neice and nephew who should be the two beneficiaries of said proceeds or settlement amounts.

“The revelation of this matter  shows the level of hypocrisy ,lack of accountability and the greed of Marcella Liburd. It shows a clear and true picture of her character and as far as I am concerned based on what has been outlined in the court matter she is frankly unworthy to represent the proud people of Central Basseterre,” said Roy Angus Fleming, PAM Candidate for Const #2.

“How can she be claiming to be  standing on a platform of Stronger Families, Safer Communities and Accountability when she her self according to these court documents does not exemplify such in her own family,” Fleming Continued

Ms. Liburd has been the most vociferous and scathing labour party candidate in attacking the integrity, accountability and even morality of the PAM candidates , particularly Eugene Hamilton. Despite the fact that Mr. Hamilton has been vindicated by the Hon. Dr. Timothy Harris, Minister of Finance,  as having nothing to do with the collapse of British American.