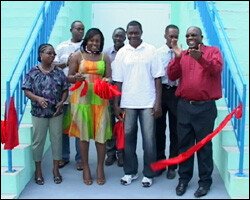 The upgrade of the Mansion Sporting Complex has been welcomed by residents, as government continues to fulfill its pledge to invest in national youth development programmes.

Spectators going to the newly fenced facility for cricket, football, or track and field events will be able to enjoy more comfortable surroundings in a new pavilion that seats scores of persons. The pavilion also offers change and wash rooms for teams, a kitchenette and office space.

“Your Parliamentary Representative and your Government continue to recognize that sports is an important medium in the integration and strengthening of each community and the nation as a whole,” Honourable Dr. Timothy Harris said at an opening ceremony on the weekend.

Community resident and sports enthusiast Wilmon McCall told SKNIS that the upgrades were “an answer to a lot of prayers.”

“Mansion residents have become so engrossed with cricket over the years. Persons from the community would come to the grounds every Sunday, in the hot sun to watch games,” he said, noting that a recent wind ball cricket tournament drew huge crowds.

“This [is testimony] that Mansion residents, love cricket, love football sports, in general and we are hoping that this facility will encourage “¦ young people to turn away from negative influences and take up a sport because some of them who are very talented have gotten involved in antisocial activities. Get back to sports,” he stressed.

Mr. McCall thanked his constituency representative, the contractors and Public Works Department for their role in the upgrades. He was highly complimentary of the interaction between the community and the relevant authorities during the construction phase, which allowed input into the design of the facility.

The first event to be staged at the upgraded complex was the Estridge Primary School Sports Day, which immediately followed the opening ceremony. Principal Iona Phillip said that she was pleased that her school “christened” the grounds. She added that the staging of the fun filled sporting activity was greatly enhanced because of the pavilion, which offered comfortable seating and shelter as well as a bar facility that generated money for the school. The fencing of the ground was also mentioned for providing added safety and security.

“I got quite a few comments from a number of persons who said that they really enjoyed the sports day this time [because] they were able to sit down and look on,” Principal Phillip noted. “Thanks to Minister [Harris] for his foresight and vision in getting the complex built.”

The Mansion Sporting Complex was renovated at a cost of $1.3 million. The ribbon cutting was performed by Minister Harris, outstanding former national and regional cricketer James Harris and prominent netballer Kerstie Rawlins. Both athletes are from the community of Mansion.