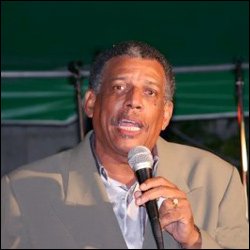 The best of the Caribbean ““ Lord Relator of Trinidad and Tobago and A.J. Browne of Jamaica will perform this Saturday at the Ninth Annual Prime Minister’s New Year’s Gala.

The gala begins at 7:30 P.M. at which former Jamaica Prime Minister the Most Honourable Percival J. Patterson, is the keynote speaker.

Relator, regarded as a musician, performer, calypsonian, writer and comedian and Jamaican A.J. Browne, who ranks among that country’s greatest vocal talents, will entertain hundreds of guests at the New Year’s Gala scheduled for the Grand Ballroom at the St. Kitts Marriott Resort.

He became the National Junior Calypso Monarch in 1965, won Scouting For Talent in 1966 and was winner of the National Buy Local Campaign in 1970.

Fascinating the nation with his charm and delivery, he felt honoured to have been approached to join the professional ranks by Lord Kitchener himself, one of the most seasoned calypso bards of the era. In 1971, Relator made his debut at the Lord Kitchener calypso tent, remaining loyal to that camp for fifteen years. By 1979 he was a household name appearing on radio and television commercials for which he wrote scripts. In 1980 he became the National Calypso Monarch and to this day he still holds the record of having received the highest ever cash prize.

During 1980-1982 his time was spent making records, travelling and performing internationally. With the Little Carib Theatre production of “J’Ouvert”, a play about Trinidad and Tobago carnival, he appeared in pantomime with Beryl McBurnie in the Caribbean, U.S.A, Canada, U.K., France, Switzerland, Germany and Italy. He made his debut on British television Channel 4 “Black On Black”; a thirty minute document hosted by Beverly Anderson, in which he was interviewed, sang calypsoes and demonstrated the art of extempo. He has also been featured with international performers such as Billy Ocean, Percy Sledge, Jimmy Cliff and Ace Cannon.

Relator’s most resounding achievement is undoubtedly “Nostalgia”, an innovative display of Relator as the virtuoso performer, the entertainer, the local historian and the memory-jerker. Delivered via this most spectacularly complete one-man show, Relator the comedian is unveiled; Relator the impersonator is discovered, imitating old calypsonians and cleverly paying homage to his pioneers at the same time. He renders accurate impersonations of Louis Armstrong, Dean Martin and Billy Ecstein, adapting their legendary intonations to calypso – a concept never before (and never since) successfully attempted by anyone else! He utilizes extempo to introduce his band and to thank the audience.

Nicknamed the local Sammy Davis Jr., Relator is also an accomplished guitarist, playing any stringed instrument from the cuatro to the double bass. When his busy schedule allows, he devotes much of his time to children, making unpaid guest appearances at schools and preparing youngsters for national and inter-island competitions. He offers much support to charities and fund-raising.

The influence of musical icons such as Bob Marley, Frank Sinatra, Stevie Wonder, Chaka Khan, Andrea Bocelli and Dennis Brown, is reflected in his work.

Al, a child prodigy, began singing ballads and reggae at an early age, earning him the respect and admiration of the city of his birth.

His incredible talent drew international attention in 1980 when he outshined all his competitors at a German talent contest and won the coveted trophy.

Catapulting into the spotlight, AJ went on his first tour of German where he captivated audiences in Berlin, Munich, Hamburg, Dusseldorf and Frankfurt. His superior talent was undeniable, his charm untouchable and his success unstoppable.

According to the Chairperson of the Gala Committee, Attorney at Law and former Speaker of the St. Kitts and Nevis National Assembly, Ms. Marcella Liburd, the best of  the Federation’s local artistes including Four-time crown Calypso Monarch King Konris, and the Modern Language will join Relator and A.J. Brown in entertaining guests.