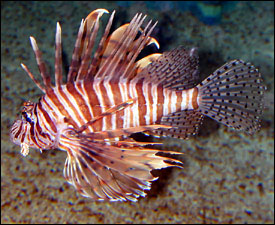 The Venomous Lionfish Is Now Off St. Kitts – Nevis

St. Kitts and Nevis is reporting the first registered sighting of the “lion fish” in its waters.

According to the Department of Marine Resources the sighting was made by Vajai Latcham of Kenneth Dive Center on the eastern side of Port Zante in about 30 feet of water about 400 to 500 yards from the shore in Basseterre.

“The lion fish is famous for its extremely long and separated spines, and has a generally striped appearance, red, green, navy green, brown, orange, yellow, black, maroon, or white. Although the lion fish is not native to all regions in the world, this fish continues to expand its territories,” said the Department of Maritime Resources.

It noted that the lion fish has been spotted in the warmer coral regions of the eastern Atlantic Ocean and Caribbean Sea and was last seen in the nearby Dutch territory of St. Eustatius.

The Department of Marine Resources has encouraged persons including divers and fishers, to be extremely cautious and to avoid contact with the venomous spines of the lion fish.

“Usually, the lion fish is not aggressive toward humans and will almost always keep their distance when given the opportunity, so they pose a relatively low risk.  In addition, their stings are not deadly, but they are usually very painful.  Anyone stung by a lion fish should seek immediate medical attention,” the Department advised.

It encouraged all fishers who come into contact with the lion fish in the waters of St. Kitts and Nevis to report the incident to the Department of Marine Resources at 465-8045 or 662-2776.