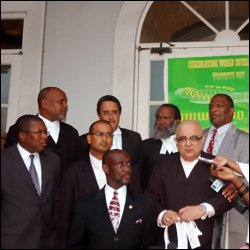 Appearing before Resident Punise Judge, His Lordship Mr. Justice Frances Belle on Monday, Lead Counsel for the Attorney General of St. Kitts and Nevis, Mr. Anthony Astaphan, S.C., informed Justice Belle that his team wanted an opportunity to clarify the intention of the National Assembly pertaining to the role of the Returning Officer.

“We wanted to look at the document so that we can decide whether to fight the case, to ask the Judge to read the Act down so that it is in conformity with the Constitution and avoid any unnecessary litigation or ask the National Assembly to review and revise and amend the Act,” said Astaphan in an interview with the Communications Unit in the Office of the Prime Minister (CUOPM) Monday afternoon.

Mr. Astaphan said the Legal Team for the Hon. Attorney General wants to make sure that any possible reason, real or imagined, is eliminated which could be used as a trigger for further litigation and injunctions on the part of the People’s Action Movement (PAM).

“We want as far as the disqualification law is concerned, to remove all obstacles, or any forms of reason or justification to prevent this matter being protracted in Court,” said Mr. Astaphan.

“As you well know, the Boundaries Commission case from beginning to end was a period of well over four months or even five months and I do not think that we would be acting rightly or properly, if we were to insist on litigation, which is going to drag out any case in the Court or the prolonging of elections,” he said.

“The focus instead is on seeking to resolve any unnecessary hiccups, obstacles, issues, reasons or anything thing so that we can say to the people of this country and the Court there can be no reason for complaint. We want to do that in order to create the conditions for the Prime Minister to decide in his own deliberate judgment as and when he thinks the election should be called,” said Mr. Astaphan, who appeared with Dr. Henry Browne, Mr. Sylvester Anthony and Mr. Arud Gossai.

Resident Punise Judge His Lordship Justice Frances Belle seems inclined not to grant any more injunctions which will prevent the holding of general elections in St. Kitts and Nevis.

Mr. Astaphan disclosed that the Judge made an order having regard to the history and significance of this matter to prevent either party from filing any further applications which would have the effect of delaying the matter.

“We readily agreed to that and we also said to the Judge that there is no need for other Order because quite apart from his indication that he would not be minded to grant any further injunctions, we took the position that there is no chance at all of Nomination Day taking place this week and we undertook to the Judge, to make the government’s position by Thursday,” said Astaphan.