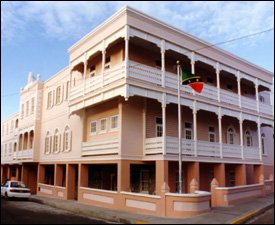 St.Kitts – Nevis Prime Minister and Labour Party Leader Dr. Denzil Douglas announced during his budget address on Tuesday that Senior Civil servants will be given five months to seek alternative employment. Douglas revealed that in an attempt to crack down on “unsustainable” financial practices to reduce payroll costs Senior Civil Servants at and over the age of fifty-five (55) will have to find employment elsewhere .

The Prime Minister emphasized the need for reducing the payroll of government  He noted that many civil servants over the age of 55 had not planned for their retirement and indicated that the practice of extending the employment of these servants of the people was not going to be a part of the government’s wage bill decrease policy. As a result the senior servants have been identified as the first casualties of  the labour gov;ts forced wage bill and payroll decrease strategy.

Douglas said “All persons who have reached the age of retirement or who make a decision to take early retirement will be requested to utilize their services in a more productive manner by seeking alternative employment in our expanding private sector or by taking advantage of the many opportunities for entrepreneurship that abounds in our economy,”

PM Douglas stated that only in very rare circumstances, where it is determined that persons possess “particular skills that cannot be obtained elsewhere in the Public Sector” will those persons be hired on a contractual basis in consultany and advisory capacities .

Douglas further stated, “One of the conditions of such a contract would be the transfer of knowledge and skills to younger individuals who would assume those roles after the contract period ends. Therefore, by September 2010 all Civil Servants who have reached retirement age and are still working month to month will be formally required to retire. Permanent Secretaries are therefore expected to use the next six months to ensure that the functions undertaken by these individuals can be undertaken by current staff,”.

Over 500 persons may find themselves out of work as a result of the cost cutting measure.

Douglas also made the revelation that the government will be putting a cease on public sector employment as no additional civil service positions will be approved.

“No additional positions will be approved or filled in Government except if it can be proven that some attempt has been made to fill the position internally without the incurrence of additional expenditure,” Douglas said.

“In this way, we intend to streamline the public service and attempt to dispel any notion that people in Government do not have sufficient work to do.  We will now be expecting ministries and departments to do more with less. This will be an integral part of our Human Resource Modernization Strategy,” Douglas explained

Other considerations by the Labour Government in its wage reduction strategy are outsourcing, public-private partnership , part-time workers and a freeze on wage increments.

“The Labour government has been forced to take these measures , which most will consider drastic, because of years and years of  mismanaging the gov’t resources and simply wasting and squandering taxpayers money ,” said MP Shawn K. Richards

“When one looks at projects like Lavallee, White Gate where almost $300 million was borrowed for but to date there is nothing to show for either project but a 6 mile long fence as well as the $40 million spent on a $16 million bypass road in addition to the millions spent renting generators after wasting $30million on prototype generators plus countless other situation and examples of gross government mismanagement and squandermania there is no wonder why our country is so indebted and now Denzil Douglas and labour has to take these measures in a last ditch attempt to try and bring down the national Debt.” Richards Continued.