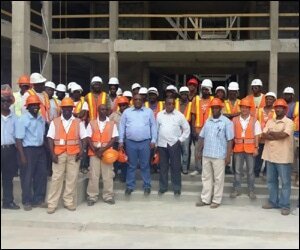 Prime Minister, Dr. the Honourable Timothy Harris, said that the Government is happy with the investor confidence in St. Kitts and Nevis as it continues to be at a very high level during his tour of the construction site of the luxury 324 room Koi Resort and Residences on Tuesday, March 01.

“That is why the projects are continuing and investors are indicating interest in new and upcoming activities,” said Prime Minister Harris. “For that, we are grateful because the significant investment would certainly spur economic growth, lead to job creation and more importantly, lead to higher earnings for the work force in St. Kitts and Nevis and the enhancement of the skills set within the country.”

Dr. Harris recalled his 2015 visit to Koi Resort and Residences, accompanied by the Honourable Vance Amory, Premier of Nevis and the Honourable Ian Patches Liburd, Minister of Public Infrastructure. He noted that he is impressed by the improvements compared to 2015.

“The construction has gone much further a paste and so we are impressed that we can see the successful completion of Koi Resort,” he said, while noting that the tour provided them with a better understanding of the progress of the project.

Prime Minister Harris echoed his delight in seeing locals afforded the opportunity to play an important role in such developments.

“And of course always, it is a good sign when we see our young men and indeed our young women at work,” he said. “As we tour the facilities, we are able to see direct benefits accruing to the ordinary citizens of St. Kitts and Nevis.”

He noted that when the resort opens, another five star top of the line facility will be added to the Federation. Dr. Harris stated that it would add immeasurably to the attractiveness of the islands as a “destination on the move, a destination able to attract foreign direct investment of a substantial nature and a destination able to bring people of significant network and discerning taste to the twin island state.”

Minister Liburd shared the same sentiments as Prime Minister Harris and noted that some substantial progress has been achieved at the Koi Resort and Residences. He stated that looking at the infrastructural development in the area of Half Moon, the resort would not only enhance the particular environment, but it will also transform the economy of St. Kitts and Nevis.