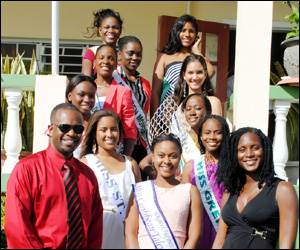 The Maynards treated them to a sumptuous Kittitian luncheon at the Manhattan Gardens and Restaurant in Lime Kiln.

The contestants, accompanied by their chaperons and members of the Haynes Smith Youth Club, were greeted on arrival by their hosts Mr. and Mrs Maynard, and Federal Minister with responsibility for Culture, the Hon. Marcella Liburd, to the performances of Valons Masquerades, led by its veteran leader, Mr Joseph Valentine Francis.

On settling down, before lunch was served, Mr. Maynard gave them a little brief of himself where among others he told them: “Apart from other things I am a calypsonian. I was actually the reigning Calypso Monarch until night… well, I didn’t lose – I just didn’t compete.

While introducing the Minister with responsibility for Culture, the Hon. Marcella Liburd, he noted that her party, the ruling St. Kitts-Nevis Labour Party, had recently appointed him candidate for the area in West Basseterre, “and hopefully I will be contesting in the upcoming elections and hopefully we will continue to win.”

He told them that by profession he is an Electrical and Computer engineer, and West Basseterre was the area in which he grew up, and that he now lives just up the road from where they were, in Mattingley Heights.

“My wife Shamara is an Attorney at Law, but she is also a past queen,” explained Mr Konris Maynard to a very captivated audience. “She has been in Queen Pageants before, coming queen and she was first runner up in St. Kitts, so she has experience of her own.”

According to Mr Maynard, the Haynes Smith Youth Club is a very prestigious club that has been holding the prestigious pageant for the last 33 years, as this year’s edition, which was due to be held Monday night (December 30) was its 34th, where teenagers like themselves got together and decided that they wanted to put something together that had some class, and that it remains a prestigious event throughout the region.

“In St. Kitts we like to win, we are not biased but if we are to win we want to win, but I am going to wish everyone all the best in your endeavours in this particular show,” commented Mr Maynard. “I want you to have fun, I want you to enjoy St. Kitts and Nevis, while you are here – I do not know if you got a chance to go over to Nevis.”

On behalf of the Constituency Branch for Constituency Three, Candidate Maynard thanked the Haynes Smith Youth Club, “for affording us this opportunity to host the contestants of the Miss Caribbean Talented Teens. It is a prestigious event that we are very proud to be partnering with and we are pleased that this relationship can continue and we hope that in the future it will grow stronger and the commitment of collaboration remains strong.”

“I want to thank the Haynes Smith Youth Club in particular the Chairperson Mr Antonio Maynard for extending this opportunity for us to collaborate on making this event a reality,” said Mr Konris Maynard in his final remarks.

“We want to say thanks to Haynes Smith Youth Club committee for pushing forward with this event for the last 34 years and we hope that they will have another 30 odd, and then add another thirty after that.

“We are very pleased to be partnering in this and we look forward to many more of these sorts of things.”

Vote of thanks on behalf of the participants was delivered by Miss Teen Montserrat, Vanice Tuitt, who thanked Mr Konris Maynard and his wife Mrs Shamara Maynard, the Minister of Culture, the Hon Marcella Liburd, and the staff at the Manhattan Gardens and Restaurant.