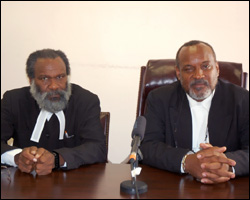 St. Kitts and Nevis High Court Judge, His Lordship Mr. Justice Frances Belle Friday rejected an application for an injunction from two opposition parliamentarians seeking to prevent the laying in the National Assembly of any new Report by the Constituency Boundaries Commission (CBC).

The decision of the Judge to grant a judicial review has been welcomed by lawyers for the Government.

“We are very pleased today that his Lordship Justice Belle did not grant the injunctions that were sought by Hon. Shawn Richards of the People’s Action Movement (PAM) and the Hon. Mark Brantley of the Concerned Citizens Movement in their joint application that they made for leave to apply for a judicial review. That I think was the single most achievement today,” said Mr. Sylvester Anthony.

“In this case, the reason there needed to be a hearing is because there was an application within the Application for Leave for an Injunction and we are very pleased that after a day of hearing (Thursday), His Lordship determined that he was not going to grant the Injunction,” said Anthony.

He said the Legal Team has continued to give an undertaking already given to the Court that nothing will be done to interfere with the judicial process which has commenced.

“Our position was that our commitment could not be open ended and there had to an equal commitment on the part of the claimants (Brantley/Richards) that this matter will be heard expeditiously,” said lawyer Anthony.

He said the Government’s Legal Team was prepared to begin the hearing Friday afternoon (November 27th) or the earliest on Monday (November 30th), but that His Lordship has indicated that there were certain other commitments of matter already set and that the earliest hearing is Tuesday afternoon (December 1st 2009) of next week.

“We are also pleased that this trial will start on Tuesday (December 1) at two o clock in the afternoon. It should last probably a day and a half or two days, so we should complete it by Wednesday and we hope as his Lordship has demonstrated today that we can get a judgement soon thereafter. This matter concluded Thursday evening at six o clock and His Lordship rendered a decision this afternoon (Friday) at around 12 noon. So if the same pattern is followed, hopefully this matter could be completed and all decks cleared by next week Thursday or there about,” said Mr. Anthony.

Attorney Dr. Henry Browne noted that the Judge was very careful to be in the forefront of his direction the reminder that this matter is one of extreme urgency and the Legal Team representing the Government are pleased that Justice Belle has demonstrated the full comprehension of the urgency of the matter.