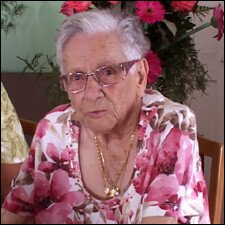 Josephine Astaphan On Her 90th Birthday

Mrs. Josephine Astaphan was joined by representatives of the Ministry of Social Development and Gender Affairs in the celebration of her 90th Birthday.

Surrounded by flowers, cake and other tokens of appreciation, Mrs. Astaphan was deeply moved noting that not many people are fortunate enough to reach 90 years of age.

Supervisor of Social Assistance Ms. Ann Wigley agreed.  She congratulated Mrs. Astaphan on reaching the glorious age and brought greetings from her Minister, and Ministry.  She described Mrs. Astaphan as one of the bedrocks of the country noting that over the years she and her late husband had silently assisted many nationals.

Ms. Evelyn Wigley was given the privilege of presenting Mrs. Astaphan with a bouquet of flowers on behalf of the Ministry of Social Development.  Mrs. Astaphan graciously accepted the present and thanked the Ministry and the government.  She further expressed appreciation to God for her many blessings, particularly her children.  The Astaphan matriarch noted that often times she had been chastised for having so many children but she saw them as blessings in her old age.  She also expressed appreciation for the people of St. Kitts who she described as her brothers and sisters.

Mrs. Astaphan emphasized that St. Kitts was her home and that she would never stop loving her people.

Mrs. Astaphan and her family are inviting the general public to join her at a Service in celebration of her life, this evening at the St. George Anglican Church, Basseterre at 6:00 p.m.