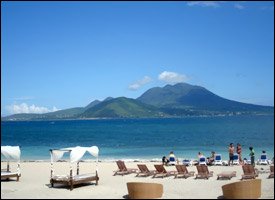 The recently-opened Spice Mill Restaurant, located on Cockleshell Beach and owned by Kittitian Roger Brisbane, has been described as one of St. Kitts’ newest dining venues in international circles.

“Spice Mill Restaurant is an inviting beach lounge and restaurant with a tasteful menu and a posh but down-to-earth ambiance. Recently opening its doors for business, the Spice Mill is currently open daily for lunch and serves dinner six nights a week,” said writer Rachel Boyer, an avid traveler with a decorated passport.

In the article in the Baltimore Travel Examiner, Boyer wrote that Spice Mill Restaurant is located on the white sands of the crescent-shaped beach and that founder Roger Brisbane had a certain look in mind when he first revealed ideas for his beautifully detailed venue.

“He wanted the restaurant’s orientation to capture the natural beauty surrounding it, and the final venue does just that. From every seat on the restaurant’s three-tiered floor set-up, diners have a phenomenal view of the neighboring mountainous island, Nevis, framed by the smooth sand, tantalizing crystal blue waters, and, most days, a cloudless sunny sky,” said Boyer.

Adding to the Spice Mill’s awesome location, the dÃ©cor and carefully designed amenities produce a warm and rustic ambiance. A canoe transformed into a bar on the upper tier replicates the original design utilized by indigenous Carib Indians to travel between Caribbean islands. Carved from a single tree, the bar’s copper surface produces a warm refection of the under-lights, while overhead lights fashioned from Dominica-woven crayfish baskets dangle above.

She said that a lounge area on the lower deck features scoop lounge chairs and cushions for seating, while the nearby two-tiered beach bar serves up cool cocktails like the signature “Stingray” drink, named so for the non-threatening rays gliding in the reef. Beach loungers can rest on the island’s most comfortable beach chairs and cabana-style beach beds.

“The casual yet chic setting of Spice Mill is welcoming, and the menu is oh-so enticing. Renowned chef Conny Andersson creates an ever-evolving spread, featuring local ingredients from the sea and the land coupled with a unique flare. Dishes on the lunch menu include tasty classics like “˜the island’s best burger’ and fish and chips, as well as tasty BBQ chicken pizza on homemade flatbread or crisp Greek salad topped with mahi mahi fillet dressed in a light, zesty sauce. The dinner menu steps it up a few notches in terms of price and creativity (unfortunately a sample menu was unavailable at the time of publishing), and reservations are suggested for dinner. You’ll feel well-taken care of by the friendly staff at the Spice Mill Restaurant, and the food will surely please you,” said the article headlined: Upscale Island Eats: Spice Mill Restaurant, Cockleshell Beach, St. Kitts, West Indies.

The upcoming Spice Mill “Summerfest” hopes to attract more clients to the restaurant as Brisbane and Andersson work to establish their venue on the island. “Summerfest” runs from early July to late September and will feature beach parties and wine pairing dinners. The Spice Mill’s capacity may not look large, but its seating arrangements and beachfront real estate can accommodate larger events like the approaching “Full Moon Party” and also beach weddings.

Spice Mill Restaurant is the second upscale dining establishment that has opened on the Southeast Peninsula within the past 12 months. The first is the Beach House which opened 15th May 2008.

The Southest Peninsular is the site for the US$2 billion  Christophe Harbour Development which includes upscale hotels, homes,  an 18-hole international golf course and a marina.