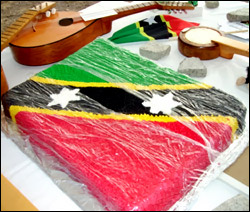 The residents of St.James’ Parish celebrated Winfest 2008/Community Day this past weekend, by honouring two St. James stalwarts in collaboration with the 25th Independence Anniversary committee.

This year, Mrs. Amabel Hobson and Mr. Alfred Mintos, both of Butlers Village, were recognized for their role in community development in the parish of St. James.

Minister of Community Development, Hon. Hensley Daniel said the event was part of the Nevis Island Administration’s approach to build community involvement and bring people together.

“Congratulations to Mr. Mintos and Mrs. Hobson for their sterling contributions to the community of St. James, the village of Butlers and the island of Nevis,” said Hon. Hensley Daniel.

Mr. Mintos has worked in Agriculture for forty-six years and at Public Works Department for sixteen years, while Mrs Hobson has paid yeoman service to persons in Butlers, Brick Kiln and the surrounding areas, through her staunch community support.

During the ceremony it was disclosed by the chairperson that as part of the 25th Independence Anniversary activities, there will be a community clean up project.Complimentary tools will be given to those interested in the project as each parish will be judged on cleanliness and beautification.

Meanwhile, the revellers of St. James had their palates full, with a packed weekend of activities, which included a J’ouvert jump-up on Monday, May12th.  The action culminated at the ever-popular Herbert’s Beach where a massive crowd was entertained by the Small Axe Band of St. Kitts and the Odissey Band out of Brick Kiln, until the wee hours of Tuesday morning.