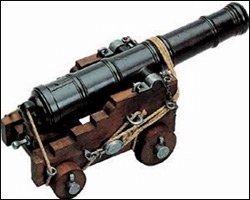 An Example Of An 18th Century English Naval Cannon

Your Heritage really matters!
The Sad Mystery of Our Missing Cannons

Five Cannon, belonging to the people of St Kitts and Nevis, have been removed from their inshore resting place at historic Whitehouse Bay.  These historical artefacts have delighted visitors and locals alike since their discovery and unique finds like these have helped put St. Kitts on the map as one of the most historically significant of the Caribbean islands. So the mysterious disappearance of these objects of national importance is a particularly saddening incident, hitting tour operators directly in the pocket and denying us access to our own history.  Our heritage has been plundered as surely as it was in the days of pirates.

Reports coming to the St. Christopher Heritage Society (SCHS) in late December 2008 indicated that the five cannon that were part of an historic 18th century wreck site had disappeared. Seen days before by divers in the area, overnight they appeared to have been taken.

While we are aware of several wreck sites in our coastal waters, this was the only site that had been surveyed and studied. Facilitated by the SCHS in 2003, a team of maritime archaeologists led by Dr. Simon Spooner, along with volunteers and the Coast Guard conducted a Maritime Archaeological Project there. It had been intended that the survey would expand to other sites but further study did not win support from the authorities. Artefacts that were taken from the site were given to the SCHS for months of preservation treatment ““ the cannon and the remains of the 18th century wooden ship, thought to be an English Troop ship, remained in situ and had become a favourite diving spot for locals and visitors alike. Several Dive Operators worked in the area and underwater photographers systematically recorded the wreck.