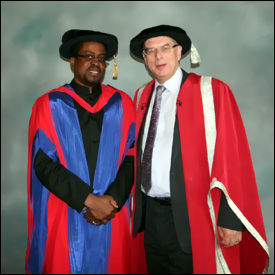 One of the Federation’s most senior diplomats has received an honorary doctoral degree from his alma mater.

St. Kitts and Nevis High Commissioner to the United Kingdom and Northern Ireland, His Excellency Dr. Kevin M. Isaac was presented with the honorary degree for his contribution to diplomacy at the University of Birmingham graduation ceremony on Thursday 12 July by Vice-Chancellor Professor David Eastwood.

Dr. Isaac, who also delivered the commencement address to 800 students, their families and faculty, has had an extensive career as a diplomat and is the youngest and first career diplomat of the Federation of St Kitts and Nevis to be elevated to the rank of High Commissioner/Ambassador.

Dr.  Isaac is St Kitts and Nevis’ Permanent Representative to the International Maritime Organisation, and Governor on the Board of the Commonwealth Secretariat. High Commissioner Isaac is also a published poet.

The University of Birmingham was established in 1900 and was the United Kingdom’s first civic university where students from all religions and backgrounds were accepted on an equal basis.

A founding member of the Russell Group, it is one of the United Kingdom’s internationally acclaimed research”“intensive universities.

The University’s work brings people from across the world to Birmingham, including researchers and teachers and more than 4,000 international students from nearly 150 different countries.