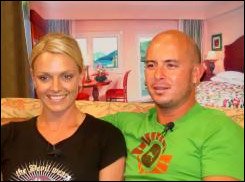 South African cricketer Herschelle Gibbs climaxed a seven day visit to the Caribbean island of St. Kitts and Nevis by tying the knot with his girlfriend of just over two years.

Herschelle and Tenielle were married on Friday (June 8) in a private ceremony at Rawlins Plantation Inn, a restored former sugar estate at Mount Pleasant in the tranquil rural community of St. Pauls in St. Kitts.

The week-long stay marked the second time the South African has visited the twin island Federation. His introduction to the island came three months earlier when his team was based here in the Group “A” Stage Matches for the ICC Cricket World Cup 2007. It was in this group stage when he established an international cricket record by hitting  six, sixes in one over at Warner Park in the capital Basseterre. Gibbs was awarded honourary citizenship by the Honourable Prime Minister along with Australia’s Matthew Hayden for setting world records at Warner Park.Having created that special memory in St. Kitts and Nevis, Gibbs was anxious to have even more memorable moments in his second home.

“It was a beautiful setting, (the) perfect setting at Rawlins Plantation Inn. For us it was everything we wanted a wedding to be,” he stressed. “The warmth and affection that the people here has shown Tenielle and I has been phenomenal,” he added noting that in some cases it has been more friendlier than in his home of Capetown.

Gibbs stressed that he will return as often as possible and expressed an interest in forming closer social and business relations. “The next time we come back we will definitely bring our family and make it two happy family gatherings. One from South Africa and one from St. Kitts,” he said.

Although starting a new family, the South African power hitter has no immediate plans to leave the game he loves his so much.

“I think, Tenielle’s job starts right now. She can keep me young for four more years,” he joked. “I’d like to maybe make another world cup if I can. My body is still good, my mind is fresh and I’m still very hungry. There’s still a lot that I’d like to accomplish at international cricket level.”

Gibbs and his new wife singled out for praise Minister of State with responsibility for Tourism, Sports and Culture Hon. Richard Skerritt and his wife, as well as staff members from his ministry. The St. Kitts Marriott Resort ““ where they stayed ““ was also acknowledged for making their return to St. Kitts and Nevis unforgettable.