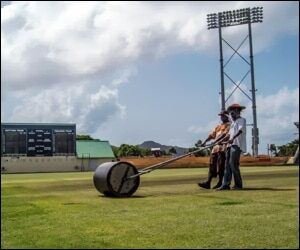 The Department of Sports plans to use the staging of the Nagico Super50 Cricket Tournament which is being held in St. Kitts from January 07 to 17, to bolster efforts to promote hardball cricket to a younger audience.

Sports Director Anthony Wiltshire said a large number of children in the Caribbean are exposed to the game through programmes that emphasize fun and use a softball. However, in order to promote a more serious developmental approach, Mr. Wiltshire said it was necessary to introduce hardball to more children.

“We have to start in the primary school,” he stated, noting that a local campaign will be rolled out to assess the cricket pitches in the various communities and to carry out any necessary upgrades. Mr. Wiltshire said that there are about 25 pitches around the island and the assessment is expected to begin at the completion of the Nagico-sponsored competition.

“No area will be left behind. Each area will have the opportunity to have a strip so that they can utilize it,” he stated. Wiltshire added that this will allow for all schools to be on a level playing field when training. The ground staff for the facilities will also be brought up to speed on the necessary care and maintenance procedures of a cricket pitch.

Additionally, the director of sports said use of the facilities at the Len Harris Cricket Academy at the Warner Park Cricket Stadium will be expanded to allow regular use by local primary school teams.