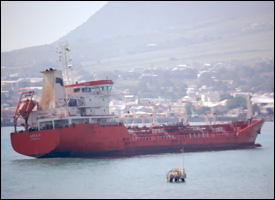 The Turkish-flagged oil tanker Azra-S which was grounded as a result of heavy seas two weeks ago, has been refloated and will discharge its cargo over the weekend.

Well-informed sources say the tanker was refloated last Friday night with the assistance of the St. Croix-based tugboat Storm.

Divers who inspected the vessel found no damage to the hull and propeller.

The Azra-S anchored further out to sea.

Meanwhile, its sister ship, the Ozden-S has arrived in Basseterre with and is now discharging its cargo of diesel.

CUOPM understands that the Azra-S will discharge its 18,000 barrels of diesel after the Ozden-S completes pumping its cargo.

Although a modern vessel with a double hull, the Director of Maritime Affairs Mr. Mc Clean Hobson said measures were taken to protect the environment from any oil spill. Booms were placed around the tanker to contain any spill.