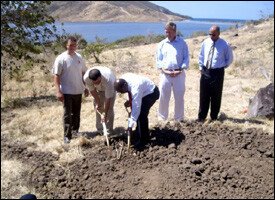 Ground Breaking For First of 1,400 Homes
Photo By Erasmus Williams

Ground was broken Thursday for another phase in the US$2.5 billion Christophe Harbour Development.

St. Kitts and Nevis Prime Minister and Minister of Tourism, Hon. Dr. Denzil L. Douglas, who participated in the ground breaking ceremony for the first of 1400 homes overall and the first of 90 in the Sandy Bank area, described the day as a milestone in the continued development in the Christophe Harbour project.

Dr. Douglas noted that it was three years ago that his St. Kitts-Nevis Labour Government began discussing the vision for Christophe Harbour with the developers.

He thanked the developers for proceeding with another phase of the project in the face of the current international economic and financial crisis. To date the Beach House Resturant and bungalows have been completed and the Tom Fazio-designed 18-hole international championship golf course is under construction on the 2,500-acre project.

“Little did we know that we would have been impacted by so many challenges that confront us at this moment. Of course I speak of the global economic and financial crisis that is setting in, but nevertheless this project continues to move ahead with a certain amount of vision, a certain amount steam, a certain amount of expectation,” said Prime Minister Douglas.

He expressed thanks to the developers for the confidence that they have had in the government and the people of St. Kitts and Nevis to have thought of this project and to continue its development despite the challenges.

“I want to thank the family of the first home that is going to be built, because there must have been some confidence not only in the country, not only in the people who live here, but a certain amount of confidence in the developers why they would have invested their hard earned money into what is now becoming the first residence here in the Christophe Harbour Development,” said the Prime Minister.

He said the project would highlight the building skills of those who would be working here as well as embrace those who would come to live among the people of St. Kitts and Nevis.

He said that the project provides a magnificent opportunity to moving local persons forward with opportunities for employment that would be generated during the construction phases as well as upon completion.

The ceremony was attended by Minister of State in the Ministry of Tourism, Sen. the Hon. Richard Skerritt; Chief Operations Officer of Christophe Harbour, Mr. Le Grand Elebash, David Dirienzo of Razo Construction Inc, local contractors and family who will own the first home.’