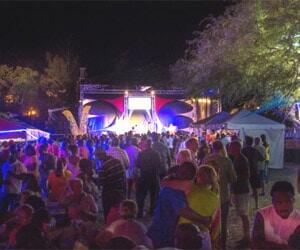 Deputy Premier and Minister of Tourism Hon. Mark Brantley told organizers of the Nevis Blues Festival that the Nevis Island Administration (NIA) will continue to support the festival.

Mr. Brantley made the comment when Richard Pavitt, owner of Blues label Nugene Records and one of the architects of the Nevis Blues Festival met with him for discussions.

“I can assure you that the Nevis Island Administration, through its Ministry of Tourism, will continue to support wholeheartedly this blues festival as we grow it together, grow it organically and hopefully, it will become the premier festival in the Caribbean,” he said.

According to Mr. Brantley, the Nevis Blues Festival offers he consuming public with a new type of music and also serves as an avenue to attract visitors to the island outside of the typical tourist season.

He also expressed satisfaction with the organizers for the early announcement of the scheduled dates for the third edition of the festival in 2017.  He described the event as a unique niche festival which the administration believes adds tremendous value to what Nevis offers as an upscale tourist destination.

Meantime, Permanent Secretary in the Ministry of Tourism Carl Williams who was also present congratulated Mr. Pavitt and his team for hosting the unique festival.

He said the ministry is pleased with the early announcement of the dates for the third edition of the festival because it ties in with the annual Tourism Month of Activities.

“We had a very successful month of activities and so we can now plan around the blues festival to incorporate even more in our Tourism Month of Activities,” he said.